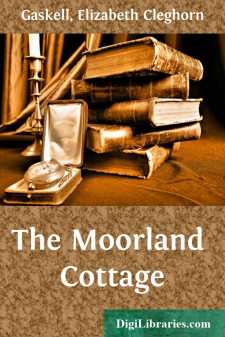 If you take the turn to the left, after you pass the lyke-gate at

Combehurst Church, you will come to the wooden bridge over the brook; keep

along the field-path which mounts higher and higher, and, in half a mile or

so, you will be in a breezy upland field, almost large enough to be called

a down, where sheep pasture on the short, fine, elastic turf. You look down

on Combehurst and its beautiful church-spire. After the field is crossed,

you come to a common, richly colored with the golden gorse and the purple

heather, which in summer-time send out their warm scents into the quiet

air. The swelling waves of the upland make a near horizon against the sky;

the line is only broken in one place by a small grove of Scotch firs, which

always look black and shadowed even at mid-day, when all the rest of the

landscape seems bathed in sunlight. The lark quivers and sings high up in

the air; too high--in too dazzling a region for you to see her. Look! she

drops into sight; but, as if loth to leave the heavenly radiance, she

balances herself and floats in the ether. Now she falls suddenly right into

her nest, hidden among the ling, unseen except by the eyes of Heaven,

flower-stalks. With something like the sudden drop of the lark, the path

goes down a green abrupt descent; and in a basin, surrounded by the grassy

hills, there stands a dwelling, which is neither cottage nor house, but

something between the two in size. Nor yet is it a farm, though surrounded

by living things. It is, or rather it was, at the time of which I speak,

the dwelling of Mrs. Browne, the widow of the late curate of Combehurst.

There she lived with her faithful old servant and her only children, a boy

and girl. They were as secluded in their green hollow as the households in

the German forest-tales. Once a week they emerged and crossed the common,

catching on its summit the first sounds of the sweet-toned bells, calling

followed with Maggie; but they were all one party, and all talked together

in a subdued and quiet tone, as beseemed the day. They had not much to say,

their lives were too unbroken; for, excepting on Sundays, the widow and

her children never went to Combehurst. Most people would have thought the

little town a quiet, dreamy place; but to those two children if seemed

the world; and after they had crossed the bridge, they each clasped more

tightly the hands which they held, and looked shyly up from beneath their

drooped eyelids when spoken to by any of their mother's friends. Mrs.

church, and as regularly declined, rather to the timid children's relief;

of the pleasure it would be to them if mamma would go and dine at Mr.

Buxton's, where the little girl in white and that great tall boy lived....