The Monkey That Would Not Kill 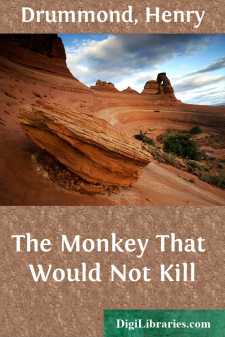 There is no such thing as an immortal monkey, but this monkey was as near it as possible. Talk of a cat's nine lives—this monkey had ninety! A monkey's business in the world is usually to make everybody merry, but the special mission of this one, I fear, was to make everybody as angry as ever they could be. In wrath-producing power, in fact, this monkey positively shone.

How many escapes the monkey had before the run-away slave presented it to the missionary—from whom I first heard of it—no one knows. It certainly had not much hair on when it arrived, and there was an ominous scar on its head, and its ears were not wholly symmetrical. But the children were vastly delighted with it, and after much kind treatment the creature was restored to rude health, and, I must confess, to quite too rude spirits. The children wanted him baptized by the time-honoured title of 'Jacko'; but by a series of exploits in which the monkey distinguished himself at the expense of every member of the household in turn, it became evident that only one name would fit a quadruped of his peculiar disposition; and that was 'Tricky.' Tricky, therefore, he was called, and as Tricky he lived and—did not die.

But by this time the whole place knew Tricky, and no one would have him. Such an unusual refusal of a present was never known before. Even the run-away slave smiled sweetly when his old friend was offered to him, and protested that, to his deep regret, he was unable to buy nuts enough to keep him.

The idea of 'wandering' Tricky in the woods, of course, occurred to the genius of the village, and a detachment of boys set off one Saturday to carry it into effect. But you might as well have tried to wander a carrier pigeon. Like Mary's little lamb, everywhere these boys went, that monkey went. When they ran, it ran, when they doubled back, it doubled back; and when they got home, dead tired, it was only to find Tricky laughing at them from the church roof.

That night the worst happened. When the people assembled for the weekly meeting, there was not found in that church one whole hymn-book. Some one, apparently, had been pelting the pulpit with them. The cushions were torn; the blinds were a wreck; two stops in the harmonium were pulled out bodily. After the service the missionary was solemnly waited on by a deputation. They were closeted for an hour and a half, but no one, except themselves, ever knew what was said or done. The only circumstances that one could in any way connect with this mysterious council was that about midnight a small boat was seen stealthily putting out to sea....