The Moccasin Ranch A Story of Dakota 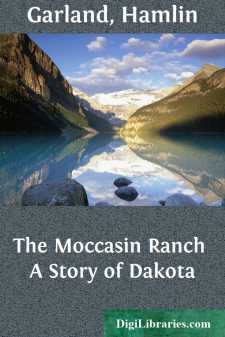 Early in the gray and red dawn of a March morning in 1883, two wagons moved slowly out of Boomtown, the two-year-old "giant of the plains." As the teams drew past the last house, the strangeness of the scene appealed irresistibly to the newly arrived immigrants. The town lay behind them on the level, treeless plain like a handful of blocks pitched upon a russet robe. Its houses were mainly shanties of pine, one-story in height, while here and there actual tents gleamed in the half-light with infinite suggestion of America's restless pioneers.

The wind blew fresh and chill from the west. The sun rose swiftly, and the thin scarf of morning cloud melted away, leaving an illimitable sweep of sky arching an almost equally majestic plain. There was a poignant charm in the air—a smell of freshly uncovered sod, a width and splendor in the view which exalted the movers beyond words.

The prairie was ridged here and there with ice, and the swales were full of posh and water. Geese were slowly winging their way against the wind, and ducks were sitting here and there on the ice-rimmed ponds. The sod was burned black and bare, and so firm with frost that the wagon chuckled noisily as it passed over it. The whistle of the driver called afar, startling the ducks from their all-night resting-places.

One of the teams drew a load of material for a house, together with a few household utensils. The driver, a thin-faced, blue-eyed man of thirty, walked beside his horses. His eyes were full of wonder, but he walked in silence.

The second wagon was piled high with boxes and barrels of groceries and hardware, and was driven by a handsome young fellow with a large brown mustache. His name was Bailey, and he seemed to be pointing the way for his companion, whom he called Burke.

As the sun rose, a kind of transformation-scene took place. The whole level land lifted at the horizon till the teams seemed crawling forever at bottom of an enormous bowl. Mystical forms came into view—grotesquely elongated, unrecognizable. Hills twenty, thirty miles away rose like apparitions, astonishingly magnified. Willows became elms, a settler's shanty rose like a shot-tower—towns hitherto unseen swam and palpitated in the yellow flood of light like shaken banners low-hung on unseen flagstaffs.

Burke marched with uplifted face. He was like one suddenly wakened in a new world, where nothing was familiar. Not a tree or shrub was in sight. Not a mark of plough or harrow—everything was wild, and to him mystical and glorious. His eyes were like those of a man who sees a world at its birth.

Hour after hour they moved across the swelling land. Hour after hour, while the yellow sun rolled up the slope, putting to flight the morning shapes on the horizon—striking the plain into level prose again, and warming the air into genial March. Hour after hour the horses toiled on till the last cabin fell away to the east, like a sail at sea, till the road faded into a trail almost imperceptible on the firm sod.