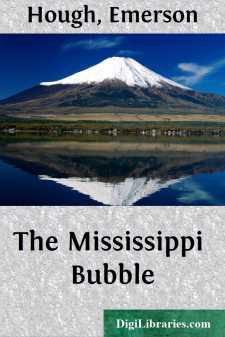 CHAPTER I THE RETURNED TRAVELER

"Gentlemen, this is America!"

The speaker cast upon the cloth-covered table a singular object, whose like none of those present had ever seen. They gathered about and bent over it curiously.

"This is that America," the speaker repeated. "Here you have it, barbaric, wonderful, abounding!"

With sudden gesture he swept his hand among the gold coin that lay on the gaming table. He thrust into the mouth of the object before him a handful of louis d'or and English sovereigns. "There is your America," said he. "It runs over with gold. No man may tell its richness. Its beauty you can not imagine."

"Faith," said Sir Arthur Pembroke, bending over the table with glass in eye, "if the ladies of that land have feet for this sort of shoon, methinks we might well emigrate. Take you the money of it. For me, I would see the dame could wear such shoe as this."

One after another this company of young Englishmen, hard players, hard drinkers, gathered about the table and bent over to examine the little shoe. It was an Indian moccasin, cut after the fashion of the Abenakis, from the skin of the wild buck, fashioned large and full for the spread of the foot, covered deep with the stained quills of the porcupine, and dotted here and there with the precious beads which, to the maker, had more worth than any gold. A little flap came up for cover to the ankle, and a thong fell from its upper edge. It was the ancient foot-covering of the red race of America, made for the slight but effectual protection of the foot, while giving perfect freedom to the tread of the wearer. Light, dainty and graceful, its size was much less than that of the average woman's shoe of that time and place.

"Bah! Pembroke," said Castleton, pushing up the shade above his eyes till it rested on his forehead, "'tis a child's shoe."

"Not so," said the first speaker. "I give you my word 'tis the moccasin of my sweetheart, a princess in her own right, who waits my coming on the Ottawa. And so far from the shoe being too small, I say as a gentleman that she not only wore it so, but in addition used somewhat of grass therein in place of hose."

The earnestness of this speech in no wise prevented the peal of laughter that followed.

"There you have it, Pembroke," cried Castleton. "Would you move to a land where princesses use hay for hosiery?"

"And done by her own hand," said the owner of the shoe, with a certain proprietary pride.

Again the laughter broke out. "Do your princesses engage in shoemaking?" asked a third gamester as he pushed into the ring. "Sure it must be a rare land. Prithee, what doth the king in handicraft? Doth he take to saddlery, or, perhaps, smithing?"

"Have done thy jests, Wilson," cried Pembroke. "Mayhap there is somewhat to be learned here of this New World and of our dear cousins, the French. Go on, tell us, Monsieur du Mesne—as I think you call yourself, sir?—tell us more of your new country of ice and snow, of princesses and little shoes."

The original speaker went a bit sullen, what with his wine and the jests of his companions....