The Mission of Janice Day 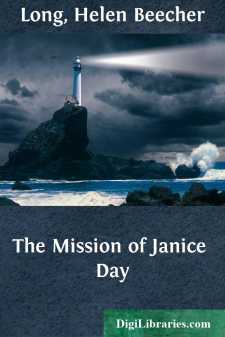 "He don't look right and he don't sleep right," complained Aunt Almira Day, swinging to and fro ponderously in one of the porch rockers and fanning herself vigorously with a folded copy of the Fireside Favorite. "If it wasn't for his puttin' away jest as many victuals as usual I'd sartain sure think he was sickenin' for something."

"Oh! I hope Uncle Jason isn't going to be ill," Janice said sympathetically. "He has always seemed so rugged."

"He's rugged enough," Aunt 'Mira continued. "Don't I tell ye he's eatin' full and plenty? But there's something on his mind—an' he won't tell me what 'tis."

"Maybe you imagine it," her niece said, pinning on her hat preparatory to leaving the old Day house on Hillside Avenue, overlooking Polktown.

"Imagine nothin'!" ejaculated Aunt 'Mira with more vigor than elegance. She was not usually snappish in her conversation. She was a fleshy, lymphatic woman, particularly moist on this unseasonably warm October day, addicted to gay colors in dress and the latest fashions as depicted in the pages of the Fireside Favorite, and usually not prone to worries of any kind.

"Imagine nothin'!" she repeated. "I've summered and wintered Jase Day for more'n twenty years; I'd ought to know him and all his ways from A to Izzard. When anything is goin' wrong with him he's allus as close-mouthed as a hard-shell clam with the lockjaw. I vum! I don't know what to make of him now."

"I haven't noticed much out of the way with Uncle Jason," Janice said reflectively. "Aren't you——"

"No, I ain't!" interrupted Aunt 'Mira. "I tell ye he don't sleep right. Lays and grunts and thrashes all night long—mutterin' in his sleep and actin' right foolish. I never see the beat. I must say 't in all the years I've slept beside Jase Day he ain't been like he is now."

"Why don't you ask him what the trouble is?"

"Ask him!" said Aunt 'Mira. "Might as well ask the stone Spink they set up as a god or something down there in Egypt. Ye'd get jest as quick an answer from it as ye would from Jase Day when he wants to keep dumb. Dumb! when he wants to say nothin' he says it like a whole deef and dumb asylum."

Janice laughed. She had noticed nothing very strange about her uncle's recent manner, and believed Aunt 'Mira, little as she was given to that failing, was borrowing trouble.

The wine of autumn seemed fairly to permeate the air. It was too beautiful a day for youth to be disturbed by mere imaginary troubles. Janice could scarcely keep from singing as she passed down the pleasant thoroughfare. The wide-branching trees shading it showered her with brilliant leaves. Across the placid lake the distant shore was a bank of variegated hues. Even the frowning height on which the pre-revolutionary fortress stood had yielded to the season's magic and looked gay in burning colors of shrub and vine.

Beyond the jaws of the cove upon the shore of which Polktown was builded, a smart little steamboat flaunted a banner of smoke across the sky. The new Constance Colfax would soon be at the Polktown dock and Janice was on her way to meet it. That is, this was her obvious purpose, as it was of many Polktown folk abroad at the hour. As yet it was the single daily excitement in which one might indulge in this little Vermont town. Soon the branch of the V. C. Railroad would be opened and then Polktown really would be in frequent touch with the outside world.

Its somnolence, its conservatism, even its crass ignorance of conditions in the great centers of industry and population, added a charm to life as it was lived in Polktown. Yet it was wide-awake regarding local affairs, and this pretty and well-dressed girl walking so blithely toward High Street had had an actual and important part in the enlivening of the lakeside community during the past few months.

It was Janice Day's earnestness, her "do something" tactics, that had carried to happy conclusion several important public movements in Polktown....