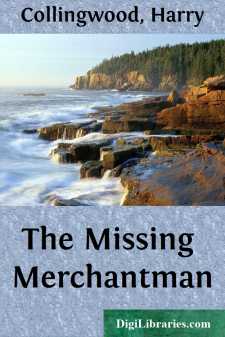 This story opens on a glorious day about the middle of July; and Weymouth, with its charming bay, was looking its very best. A gentle southerly breeze was blowing; the air was clear—just warm enough to render a dip in the sea the quintessence of luxury—and so laden with ozone and the wholesome scent of the sea that to breathe it was like imbibing a draught of elixir vitae. The east land was in itself a picture as it stretched across the horizon in front of the town, its lofty chalk-cliffs and swelling downs, the latter dotted here and there with a solitary farm-house or a clump of trees, gleaming softly through the clear transparent atmosphere in a thousand varied hues of green, and creamy white, and ruddy neutral, which gradually merged into a series of delicate pearly-greys as the eye followed the bold outline to where Saint Alban’s Head sloped down into the azure sea. The noble bay, gently ruffled by the morning breeze, shimmered and sparkled brilliantly in the strong unclouded sunlight, its rippling wavelets chasing each other shoreward in long lines until they plashed with a soothing murmur into mimic breakers upon the broad, smooth, firm expanse of sand, whereon happy children were disporting themselves, bare-footed, with boat, and spade, and bucket, to their innocent hearts’ content.

The proprietors of the bathing-vans were doing an excellent business, their lumbering vehicles jolting noisily down into the water with scarcely a moment’s intermission. The band, drawn up in front of the hideous statue to George the Fourth, which so greatly disfigures the town, was discoursing, fairly well, a selection of good music; a long line of chairs on the sands was fully occupied by loungers, mostly ladies, reading, or amusing themselves by watching the antics of the thronging children; the broad promenade was crowded with people on pleasure bent. Light skiffs and neat well-appointed sailing boats were darting hither and thither along the surface of the glancing waters; and farther out, at a distance of about a mile from the shore, some half-a-dozen or more yachts of various rigs and tonnage were lying at anchor, with their club burgees gaily fluttering in the breeze, and most of them with mainsail hoisted, or with other preparations actively going forward toward getting under weigh for a day’s cruise.

The delightful little watering-place, it has been said, was looking its best; or at least this was the opinion expressed by a young man who, accompanied by his father and sister, walked up the esplanade on that particular morning, on his way to the railway-station en route for London by the ten o’clock South-Western express—his luggage having preceded him on a hand-truck.

As the young man happens to be the hero of the present story, it may not be amiss to describe him somewhat particularly.

Edward Damerell, then—for that was his name—was, at the date of our introduction to him, within a month of reaching his nineteenth year; and he had hoped to spend his birthday at home with his father and sister, the only relatives he possessed on earth, but circumstances had ordered it otherwise....