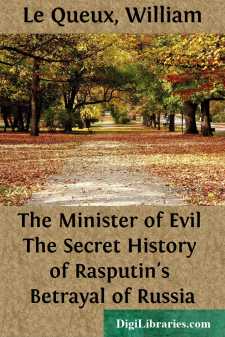 CHAPTER I rasputin meets the empress

For those who do not read Spanish I would translate the passage as:

"Now I say to you; let an author of renown fill a book with twaddle, and if it is not praised by the critics, you may tar and feather me."

I am not an author of renown. Indeed, I make no pretence of the delicacies of literary style, or the turning of fine phrases of elegant diplomacy. My object is merely to record in these pages the truth regarding the crumbling of Russia, and the downfall of our Imperial Throne.

Anyone who cares to search the voluminous records in the Bureau of Police in the long Bibikovsky Boulevard, in Kiev, will find my dossier neatly filed and tabulated, as are those of most Russians. You will find that I, Féodor, son of Féodor Rajevski, musician temporarily abroad, and his wife Varvara, was born in the Via Galliera, at Bologna, in Italy, on July 8, 1880, and on March 3, 1897, entered the University in the Vladimirskaya. I venture to think that the police have but little inscribed to my detriment save perhaps a few students' pranks in the Kreshtchatik, and the record of that memorable night when we daubed with blue and white paint the equestrian statue in front of the Merchants' Club, and I was fined twenty roubles by the bearded old magistrate for the part I played in the joke.

Had there been anything serious against me I doubt whether I should have occupied, as I did for some years, the post of confidential secretary to "Grichka," that saintly unwashed charlatan whose real name was Gregory Novikh, and whom the world knew by the nickname of "Rasputin."

Of my youth I need say but little. After my student days I obtained, through the influence of a high Government official named Branicki, a friend of my father, a clerical post in the bureau of political police of the Empire, a department of the Ministry of the Interior, and for several years pursued a calm, uneventful life in that capacity. In consequence of a grave scandal discovered in my department—for my chief had secured the conviction of a certain wealthy nobleman named Tiniacheff, in Kharkoff, who was perfectly innocent of any offence—I was one day called as witness by the court of inquiry sitting in Moscow.

It was at that inquiry early in 1903 that I first met General Kouropatkine, who at that time had risen to high favour with Her Majesty the Empress and was—as was afterwards discovered—urging the Tsar to make war against Japan, well knowing that any attacks by us would be foredoomed to failure. At the General's instigation I was transferred to the Ministry of War as an under-secretary in his Cabinet, and he sent me—on account of my knowledge of Italian—upon a confidential mission to Milan. This, I presume, I carried out entirely to his satisfaction, for on two other occasions I was sent to Italy with messages to a certain Baron Svereff, a rich Russian financier living in San Remo, and with whom no doubt Kouropatkine was engaged in traitorous dealings.

One day, having been called by telephone to the house of His Excellency, I found, seated in his big luxuriously furnished room, and chatting confidentially, a strange-looking, unkempt, sallow-faced man of thirty or so, with broad brow, narrow sunken cheeks, and long untrimmed beard, who, as soon as he turned his big deep-set eyes upon mine, held me in fascination.

His was a most striking countenance, broad in the protruding forehead which narrowed to the point of his black beard, and being dressed as a monk in a long, shabby, black robe I recognised at once he was one of those fakirs we have all over Russia, one of those self-sacrificing bogus "holy" men who wander from town to town obsessed by religious mania, full of fictitious self-denial, yet collecting kopecks for charity.

Religion of all creeds has its esoteric phases, and our own Greek Church is certainly not alone in its "cranks."

"Rajevski, this is the Starets, Gregory Novikh," said the General, who was in uniform with the cross of St. Andrew at his throat.

I stood for a few seconds astounded. On being introduced to me, the unkempt, uncleanly fellow crossed his arms over his chest, bowed, and growled in a deep voice a word of benediction....