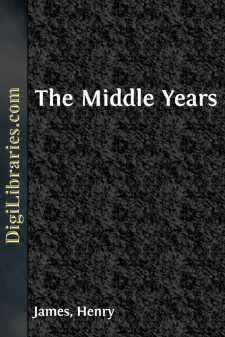 If the author of this meandering record has noted elsewhere that an event occurring early in 1870 was to mark the end of his youth, he is moved here at once to qualify in one or two respects that emphasis. Everything depends in such a view on what one means by one's youth—so shifting a consciousness is this, and so related at the same time to many different matters. We are never old, that is we never cease easily to be young, for all life at the same time: youth is an army, the whole battalion of our faculties and our freshnesses, our passions and our illusions, on a considerably reluctant march into the enemy's country, the country of the general lost freshness; and I think it throws out at least as many stragglers behind as skirmishers ahead—stragglers who often catch up but belatedly with the main body, and even in many a case never catch up at all. Or under another figure it is a book in several volumes, and even at this a mere instalment of the large library of life, with a volume here and there closing, as something in the clap of its covers may assure us, while another remains either completely agape or kept open by a fond finger thrust in between the leaves. A volume, and a most substantial, had felt its pages very gravely pressed together before the winter's end that I have spoken of, but a restriction may still bear, and blessedly enough, as I gather from memory, on my sense of the whole year then terminated—a year seen by me now in the light of agitations, explorations, initiations (I scarce know how endearingly enough to name them!) which I should call fairly infantine in their indifference to proportions and aims, had they not still more left with me effects and possessions that even yet lend themselves to estimation.

It was at any rate impossible to have been younger, in spite of whatever inevitable submissions to the rather violent push forward at certain particular points and on lines corresponding with them, than I found myself, from the first day of March 1869, in the face of an opportunity that affected me then and there as the happiest, the most interesting, the most alluring and beguiling, that could ever have opened before a somewhat disabled young man who was about to complete his twenty-sixth year. Treasures of susceptibility, treasures not only unconscious of the remotest approach to exhaustion, but, given the dazzling possibilities, positively and ideally intact, I now recognise—I in fact long ago recognised—on the part of that intensely "reacting" small organism; which couldn't have been in higher spirits or made more inward fuss about the matter if it had come into a property measured not by mere impressions and visions, occasions for play of perception and imagination, mind and soul, but by dollars and "shares," lands and houses or flocks and herds. It is to the account of that immense fantastication that I set down a state of mind so out of proportion to anything it could point to round about save by the vaguest of foolish-looking gestures; and it would perhaps in truth be hard to say whether in the mixture of spirit and sense so determined the fact of innocence or that of intelligence most prevailed....