The Methodist A Poem 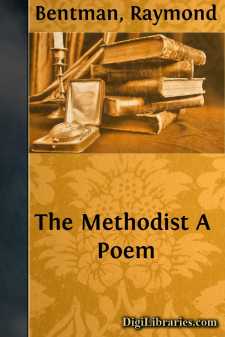 Evan Lloyd’s works consist chiefly of four satires written in 1766 and 1767, all of which are now little-known. What little notice he receives today results from his friendship with John Wilkes and David Garrick and from one satire, The Methodist, which is usually included in surveys of anti-Methodist literature. For the most part, his obscurity is deserved. In The Methodist, however, he participates in a short-lived revolt against the tyranny of Augustan satire and shows considerable evidence of a talent that might have created a new style for formal verse satire.

The seventeen-sixties were a difficult period for satire. The struggle between Crown and Parliament, the new industrial and agricultural methods, the workers’ demands for higher pay, the new rural and urban poor, the growth of the Empire, the deteriorating relations with the American colonies, the increasing influence of the ideas of the Enlightenment, the popularity of democratic ideas, the Wilkes controversy, the growth of Methodism, the growth of the novel, the interest in the gothic and the picturesque and in chinoiserie, sentimentality, enthusiasm—all these activities made England a highly volatile country. Some changes were truly dynamic, others just fads. But to someone living in the period, who dared to look around him, the complexity of the present and the uncertainty of the future must have seemed enormous.

To a satirist, such complexity makes art difficult. Satire usually deals with every-day realities, to which it applies simple moral ideals. The Augustan satiric alternative—returning to older beliefs in religion, government, philosophy, art—and the stylistic expression of such beliefs—formal verse satire and epistle, mock-poem, heroic or Hudibrastic couplet, diction of polite conversation, ironic metaphysical conceits, fantastic fictional situations—become irrelevant to the satirist writing when the past seems lost. In his later works, Pope took Augustan satire about as far as it could go. The Epilogue to the Satires becomes an epilogue to all Augustan satire and the conclusion of The New Dunciad declares the death of its own tradition. There is a sense now that England and the world have reached the point of no return. The satirist of the seventeen-sixties who repeats the ideas and styles of Butler, Dryden, Swift, Gay, and Pope seems not only imitative but out-of-touch with the world around him.

But such difficulties can provide the impetus for new forms and for original styles. And in the seventeen-sixties the writers of formal satire show signs of responding to the challenge. Christopher Anstey, Charles Churchill, Robert Lloyd, and Evan Lloyd seem, during this decade, to be developing their considerable facilities with satiric technique toward the creation of new styles. Anstey’s New Bath Guide has a combination of epistolary fiction, realism, use of naive observers, changing points of view, sweeping view of the social scene, great range of subjects, rolicking verse forms, and tone of detached amusement which suggests a satirist who, while still largely derivative, had the talent to create new techniques....