The Metamorphoses of Ovid Vol. I, Books I-VII 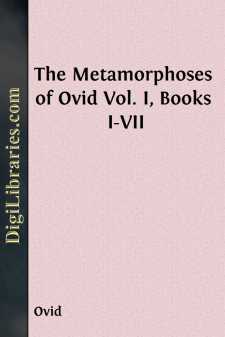 Add to My Favorites
Published: 9 years ago
Downloads: 72
Rating: (1 Vote)

The Metamorphoses of Ovid are a compendium of the Mythological narratives of ancient Greece and Rome, so ingeniously framed, as to embrace a large amount of information upon almost every subject connected with the learning, traditions, manners, and customs of antiquity, and have afforded a fertile field of investigation to the learned of the civilized world. To present to the public a faithful translation of a work, universally esteemed, not only for its varied information, but as being the masterpiece of one of the greatest Poets of ancient Rome, is the object of the present volume.

To render the work, which, from its nature and design, must, of necessity, be replete with matter of obscure meaning, more inviting to the scholar, and more intelligible to those who are unversed in Classical literature, the translation is accompanied with Notes and Explanations, which, it is believed, will be found to throw considerable light upon the origin and meaning of some of the traditions of heathen Mythology.

In the translation, the text of the Delphin edition has been generally adopted; and no deviation has been made from it, except in a few instances, where the reason for such a step is stated in the notes; at the same time, the texts of Burmann and Gierig have throughout been carefully consulted. The several editions vary materially in respect to punctuation; the Translator has consequently used his own discretion in adopting that which seemed to him the most fully to convey in each passage the intended meaning of the writer.

The Metamorphoses of Ovid have been frequently translated into the English language. On referring to Mr. Bohn’s excellent Catalogue of the Greek and Latin Classics and their Translations, we find that the whole of the work has been twice translated into English Prose, while five translations in Verse are there enumerated. A prose version of the Metamorphoses was published by Joseph Davidson, about the middle of the last century, which professes to be “as near the original as the different idioms of the Latin and English will allow;” and to be “printed for the use of schools, as well as of private gentlemen.” A few moments’ perusal of this work will satisfy the reader that it has not the slightest pretension to be considered a literal translation, while, by its departure from the strict letter of the author, it has gained nothing in elegance of diction. It is accompanied by “critical, historical, geographical, and classical notes in English, from the best Commentators, both ancient and modern, beside a great number of notes, entirely new;” but notwithstanding this announcement, these annotations will be found to be but few in number, and, with some exceptions in the early part of the volume, to throw very little light on the obscurities of the text. A fifth edition of this translation was published so recently as 1822, but without any improvement, beyond the furbishing up of the old-fashioned language of the original preface....