The Merry Wives of Windsor The Works of William Shakespeare [Cambridge Edition] [9 vols.] 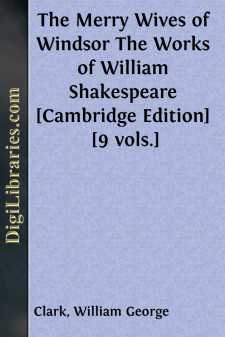 Besides the copies of the Merry Wives of Windsor appearing in the folios and modern editions, a quarto, Q3, has been collated in these Notes, of which the following is the title:

The | Merry Wives | of Windsor. | with the humours of Sir John Falstaffe, | as also, The swaggering Vaine of Ancient | Pistoll, and Corporall Nym. |written by William Shake-speare. | Newly corrected. | London: | printed by T. H. for R. Meighen and are to be sold | at his Shop, next to the Middle-Temple Gate, and in | S. Dunstan’s Church-yard in Fleet Street. | 1630.

Q1 and Q2 are editions of an early sketch of the same play. The variations between the text of these quartos and the received text are so great that collation cannot be attempted. The text printed at the end of the play is taken literatim from Q1, the edition of 1602, of which a copy is preserved among Capell’s Shakespeariana, and this text is collated verbatim with Q2, the second quarto printed in 1619. Q1 was reprinted in 1842 for the Shakespeare Society by Mr J. O. Halliwell. This text, which differs in one or two places from Capell’s Q1, has also been collated. Q2 is given among Twenty of the Plays of Shakespeare, edited by Steevens. Their titles are as follows:

(1) A | Most pleasaunt and | excellent conceited Co-|medie, of Syr John Falstaffe, and the | Merrie Wiues of Windsor. | Enter-mixed with sundrie | variable and pleasing humors of Syr Hugh | the Welch Knight, Justice Shallow, and his | wise Cousin M. Slender. | With the Swaggering vaine of Auncient | Pistoll, and Corporall Nym. | By William Shakespeare. | As it hath been diuers times Acted by the right Honorable | my Lord Chamberlaines seruants. Both before her | Maiestie, and else-where. | London. | Printed by T. C. for Arthur Johnson, and are to be sold at | his shop in Powles Church-yard, at the signe of the | Flower de Leuse and the Crowne. | 1602.

[This consists of 7 Quires of 4. In the Quire G one line, which we have included in brackets, has been cut away by the binder. We have supplied it from Halliwell’s edition and Q2.]

(2) A | Most pleasant and ex-|cellent Comedy, | of Sir John Falstaffe, and the | merry Wives of Windsor. | With the swaggering vaine of An|cient Pistoll, and Corporall Nym. | Written by W. Shakespeare. | Printed for Arthur Johnson, 1619.

Host of the Garter Inn.

Not in Qq Ff. Inserted by Rowe.