The Merry-Thought: or the Glass-Window and Bog-House Miscellany Parts 2, 3 and 4 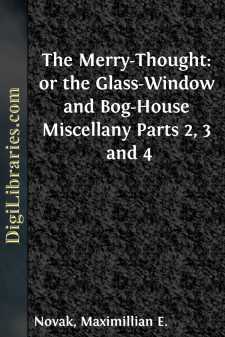 In an address to the American Society for Eighteenth Century Studies at the 1983 annual meeting, Roger Lonsdale suggested that our knowledge of eighteenth-century poetry has depended heavily on what our anthologies have decided to print. For the most part modern anthologies have, in turn, drawn on collections put together at the end of the eighteenth century and the beginning of the next, when the ideal for inclusion was essentially that of “polite taste.” The obscene, the feminine, and the political were by general cultural agreement usually omitted. Lonsdale is not the only scholar questioning the basis of the canon; indeed, revisionism is fast becoming one of the more ingenious--and useful--parlor games among academics. Modern readers are no longer so squeamish about obscenity nor so uncomfortable with the purely personal lyric as were the editors at the end of the eighteenth century. And we are hardly likely to find poetry written by women objectionable on that score alone. In short, the anthologies we depend upon are out of date.

Among the works that would never have been a source of poems for the canon, and one mentioned by Lonsdale, was the collection of verse published in four parts by J. Roberts beginning in 1731, The Merry-Thought: or, the Glass-Window and Bog-House Miscellany, commonly known simply as The Bog-House Miscellany. Its contemporary reputation may be described as infamous. James Bramston, in his The Man of Taste (1733), mentioned it as an example in poetry of the very opposite of “good Taste” (ARS 171 [1975], 7). Polite taste, of course, is meaningful only if it can define itself by what it excludes, and nothing could be in worse taste than a collection of pieces written on windows, carved in tables, or inscribed on the walls of Britain’s loos.

Just as the compilers of a modern work, The Good Loo Guide, were parodying a well-known guide book to British restaurants, so the unknown authors of The Merry-Thought had some notion, however discontinuous, of parodying the nation’s polite literature. Were not Pope and Swift famous for their distinguished miscellanies? What could be more amusing than a collection of poems that represented a different poetic ideal--a collection of verse with none of the pretensions to artistic merit claimed by the superstars of the poetic world--the spontaneous productions of nonpoets in moments of idleness or desperation. Apparently some of the inscribers in the bog-houses used excrement as a medium for--as well as a subject of--their inscriptions. The Merry-Thought, then, is not even the kind of art that Dryden attacked in MacFlecknoe and Pope in his Dunciad--the work of bad poets masquerading as geniuses. Rather, it is a primitive form of folk art produced as a more or less spontaneous act of play or passion, and achieving some small degree of respectability only when practiced by a respected poet and collected with his more serious verse. Like modern “serial” graffiti, it could function as a form of communication since the first inscriptions often provoked those who followed to make their own contributions....