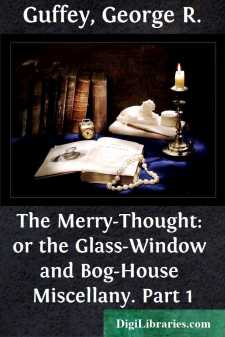 For modern readers, one of the most intriguing scenes in Daniel Defoe's Moll Flanders (1722) occurs during the courtship of Moll by the man who is to become her third husband. Aware that the eligible men of her day have little interest in prospective wives with small or nonexistent fortunes, Moll slyly devises a plan to keep her relative poverty a secret from the charming and (as she has every reason to believe) wealthy plantation owner who has fallen in love with her. To divert attention from her own financial condition, she repeatedly suggests that he has been courting her only for her money. Again and again he protests his love. Over and over she pretends to doubt his sincerity.

After a series of exhausting confrontations, Moll's lover begins what is to us a novel kind of dialogue:

One morning he pulls off his diamond ring and writes upon the glass of the sash in my chamber this line:

You I love and you alone.

I read it and asked him to lend me the ring, with which I wrote under it thus:

And so in love says every one.

He takes his ring again and writes another line thus:

Virtue alone is an estate.

I borrowed it again, and I wrote under it:

But money's virtue, gold is fate.

After a number of additional thrusts and counterthrusts of this sort, Moll and her lover come to terms and are married.

The latter half of the twentieth century has seen a steady growth of serious scholarly interest in graffiti. Sociologists, psychologists, and historians have increasingly turned to the impromptu "scratchings" of both the educated and the uneducated as indicators of the general mental health and political stability of specific populations. Although most of us are familiar with at least a few of these studies and all of us have observed numerous examples of this species of writing on the walls of our cities and the rocks of our national parks, we are not likely, before encountering this scene in Moll Flanders, to have ever before come into contact with graffiti produced with such an elegant writing implement.

Glass being fragile and diamonds being relatively rare, it is not surprising that few examples of graffiti produced by the method employed by Moll and her lover are known to us today. Interestingly enough, we do, however, have available to us a variety of Renaissance and eighteenth-century written materials suggesting that the practice of using a diamond to write ephemeral statements on window glass was far less rare in those periods than we might expect. Holinshed, for example, tells us that in 1558 when Elizabeth was released from imprisonment at Woodstock, she taunted her enemies by writing

these verses with hir diamond in a glasse window verie legiblie as here followeth:

And in John Donne's "A Valediction: of my Name in the Window," we find two lovers in a situation reminiscent of that of the scene I previously quoted from Moll Flanders. Using a diamond, the poet, before beginning an extended journey, scratches his name on a window pane in the house of his mistress....