The Memoirs of Victor Hugo 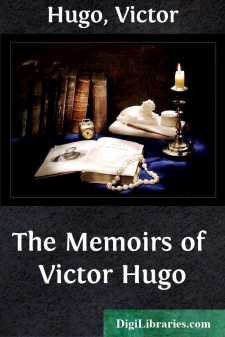 This volume of memoirs has a double character—historical and intimate. The life of a period, the XIX Century, is bound up in the life of a man, VICTOR HUGO. As we follow the events set forth we get the impression they made upon the mind of the extraordinary man who recounts them; and of all the personages he brings before us he himself is assuredly not the least interesting. In portraits from the brushes of Rembrandts there are always two portraits, that of the model and that of the painter.

This is not a diary of events arranged in chronological order, nor is it a continuous autobiography. It is less and it is more, or rather, it is better than these. It is a sort of haphazard chronique in which only striking incidents and occurrences are brought out, and lengthy and wearisome details are avoided. VICTOR HUGO'S long and chequered life was filled with experiences of the most diverse character—literature and politics, the court and the street, parliament and the theatre, labour, struggles, disappointments, exile and triumphs. Hence we get a series of pictures of infinite variety.

Let us pass the gallery rapidly in review.

It opens in 1825, at Rheims, during the coronation of CHARLES X, with an amusing causerie on the manners and customs of the Restoration. The splendour of this coronation ceremony was singularly spoiled by the pitiable taste of those who had charge of it. These worthies took upon themselves to mutilate the sculpture work on the marvellous façade and to "embellish" the austere cathedral with Gothic decorations of cardboard. The century, like the author, was young, and in some things both were incredibly ignorant; the masterpieces of literature were then unknown to the most learned littérateurs: CHARLES NODIER had never read the "Romancero", and VICTOR HUGO knew little or nothing about Shakespeare.

At the outset the poet dominates in VICTOR HUGO; he belongs wholly to his creative imagination and to his literary work. It is the theatre; it is his "Cid", and "Hernani", with its stormy performances; it is the group of his actors, Mlle. MARS, Mlle. GEORGES, FREDERICK LEMAITRE, the French KEAN, with more genius; it is the Academy, with its different kind of coteries.

About this time VICTOR HUGO questions, anxiously and not in vain, a passer-by who witnessed the execution of LOUIS XVI, and an officer who escorted Napoleon to Paris on his return from the Island of Elba.

Next, under the title, "Visions of the Real", come some sketches in the master's best style, of things seen "in the mind's eye," as Hamlet says. Among them "The Hovel" will attract attention. This sketch resembles a page from EDGAR POE, although it was written long before POE's works were introduced into France.

With "Love in Prison" VICTOR HUGO deals with social questions, in which he was more interested than in political questions. And yet, in entering the Chamber of Peers he enters public life. His sphere is enlarged, he becomes one of the familiars of the Tuileries....