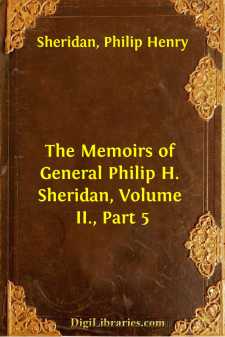 The night of March 30 Merritt, with Devin's division and Davies's brigade, was camped on the Five Forks road about two miles in front of Dinwiddie, near J. Boisseau's. Crook, with Smith and Gregg's brigades, continued to cover Stony Creek, and Custer was still back at Rowanty Creek, trying to get the trains up. This force had been counted while crossing the creek on the 29th, the three divisions numbering 9,000 enlisted men, Crook having 3,300, and Custer and Devin 5,700.

During the 30th, the enemy had been concentrating his cavalry, and by evening General W. H. F. Lee and General Rosser had joined Fitzhugh Lee near Five Forks. To this force was added, about dark, five brigades of infantry—three from Pickett's division, and two from Johnson's—all under command of Pickett. The infantry came by the White Oak road from the right of General Lee's intrenchments, and their arrival became positively known to me about dark, the confirmatory intelligence being brought in then by some of Young's scouts who had been inside the Confederate lines.

On the 31st, the rain having ceased, directions were given at an early hour to both Merritt and Crook to make reconnoissances preparatory to securing Five Forks, and about 9 o'clock Merritt started for the crossroads, Davies's brigade supporting him. His march was necessarily slow because of the mud, and the enemy's pickets resisted with obstinacy also, but the coveted crossroads fell to Merritt without much trouble, as the bulk of the enemy was just then bent on other things. At the same hour that Merritt started, Crook moved Smith's brigade out northwest from Dinwiddie to Fitzgerald's crossing of Chamberlain's Creek, to cover Merritt's left, supporting Smith by placing Gregg to his right and rear. The occupation of this ford was timely, for Pickett, now in command of both the cavalry and infantry, was already marching to get in Merritt's rear by crossing Chamberlain's Creek.

To hold on to Fitzgerald's ford Smith had to make a sharp fight, but Mumford's cavalry attacking Devin, the enemy's infantry succeeded in getting over Chamberlain's Creek at a point higher up than Fitzgerald's ford, and assailing Davies, forced him back in a northeasterly direction toward the Dinwiddie and Five Forks road in company with Devin. The retreat of Davies permitted Pickett to pass between Crook and Merritt, which he promptly did, effectually separating them and cutting off both Davies and Devin from the road to Dinwiddie, so that to get to that point they had to retreat across the country to B. Boisseau's and then down the Boydton road.

Gibbs's brigade had been in reserve near the intersection of the Five Forks and Dabney roads, and directing Merritt to hold on there, I ordered Gregg's brigade to be mounted and brought to Merritt's aid, for if Pickett continued in pursuit north of the Five Forks road he would expose his right and rear, and I determined to attack him, in such case, from Gibbs's position. Gregg arrived in good season, and as soon as his men were dismounted on Gibbs's left, Merritt assailed fiercely, compelling Pickett to halt and face a new foe, thus interrupting an advance that would finally have carried Pickett into the rear of Warren's corps....