The Memoirs of General Philip H. Sheridan, Volume I., Part 3 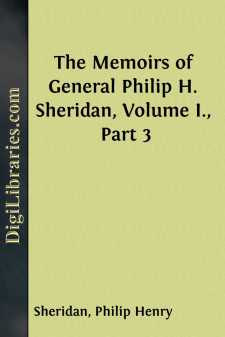 By 9 o'clock on the morning of September 22 my command took up a position within the heavy line of intrenchments at Chattanooga, the greater part of which defenses had been thrown up since the army commenced arriving there the day before. The enemy, having now somewhat recovered from the shock of the recent battle, followed carefully, and soon invested us close into our lines with a parallel system of rifle-pits. He also began at once to erect permanent lines of earthworks on Missionary Ridge and to establish himself strongly on Lookout Mountain. He then sent Wheeler's cavalry north of the Tennessee, and, aided greatly by the configuration of the ground, held us in a state of partial siege, which serious rains might convert into a complete investment. The occupation of Lookout Mountain broke our direct communication with Bridgeport-our sub-depot—and forced us to bring supplies by way of the Sequatchie Valley and Waldron's Ridge of the Cumberland Mountains, over a road most difficult even in the summer season, but now liable to be rendered impassable by autumn rains. The distance to Bridgeport by this circuitous route was sixty miles, and the numerous passes, coves, and small valleys through which the road ran offered tempting opportunities, for the destruction of trains, and the enemy was not slow to take advantage of them. Indeed, the situation was not promising, and General Rosecrans himself, in communicating with the President the day succeeding the battle of Chickamauga, expressed doubts of his ability to hold the gateway of the Cumberland Mountains.

The position taken up by my troops inside the lines of Chattanooga was near the old iron-works, under the shadow of Lookout Mountain. Here we were exposed to a continual fire from the enemy's batteries for many days, but as the men were well covered by secure though simple intrenchments, but little damage was done. My own headquarters were established on the grounds of Mr. William Crutchfield, a resident of the place, whose devotion to the Union cause knew no bounds, and who rendered me—and, in fact, at one time or another, nearly every general officer in the Army of the Cumberland—invaluable service in the way of information about the Confederate army. My headquarters camp frequently received shots from the point of Lookout Mountain also, but fortunately no casualties resulted from this plunging fire, though, I am free to confess, at first our nerves were often upset by the whirring of twenty-pounder shells dropped inconsiderately into our camp at untimely hours of the night.

In a few days rain began to fali, and the mountain roads by which our supplies came were fast growing impracticable. Each succeeding train of wagons took longer to make the trip from Bridgeport, and the draft mules were dying by the hundreds. The artillery horses would soon go too, and there was every prospect that later the troops would starve unless something could be done. Luckily for my division, a company of the Second Kentucky Cavalry had attached itself to my headquarters, and, though there without authority, had been left undisturbed in view of a coming reorganization of the army incidental to the removal of McCook and Crittenden from the command of their respective corps, a measure that had been determined upon immediately after the battle of Chickamauga....