The Memoirs of General Philip H. Sheridan, Volume I., Part 2 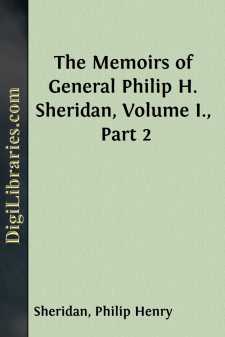 The expedition referred to by General Halleck in his parting conversation was composed of the Second Michigan and Second Iowa regiments of cavalry, formed into a brigade under command of Colonel Washington L. Elliott, of the Second Iowa. It was to start on the night of the 27th of May at 12 o'clock, and proceed by a circuitous route through Iuka, Miss., to Booneville, a station on the Mobile and Ohio Railroad, about twenty-two miles below Corinth, and accomplish all it could in the way of destroying the enemy's supplies and cutting his railroad communications.

The weather in that climate was already warm, guides unobtainable, and both men and horses suffered much discomfort from the heat, and fatigue from the many delays growing out of the fact that we were in almost total ignorance of the roads leading to the point that we desired to reach. In order that we might go light we carried only sugar, coffee, and salt, depending on the country for meat and bread. Both these articles were scarce, but I think we got all there was, for our advent was so unexpected by the people of the region through which we passed that, supposing us to be Confederate cavalry, they often gave us all they had, the women and servants contributing most freely from their, reserve stores.

Before reaching Booneville I had the advance, but just as we arrived on the outskirts of the town the brigade was formed with the Second Iowa on my right, and the whole force moved forward, right in front, preceded by skirmishers. Here we encountered the enemy, but forced him back with little resistance. When we had gained possession of the station, Colonel Elliott directed me to take the left wing of my regiment, pass to the south, and destroy a bridge or culvert supposed to be at a little distance below the town on the Mobile and Ohio Railroad. The right wing, or other half of the regiment, was to be held in reserve for my support if necessary. I moved rapidly in the designated direction till I reached the railroad, and then rode down it for a mile and a half, but found neither bridge nor culvert. I then learned that there was no bridge of any importance except the one at Baldwin, nine miles farther down, but as I was aware, from information recently received, that it was defended by three regiments and a battery, I concluded that I could best accomplish the purpose for which I had been detached—crippling the road—by tearing up the track, bending the rails, and burning the cross-ties. This was begun with alacrity at four different points, officers and men vieing with one another in the laborious work of destruction. We had but few tools, and as the difficulties to overcome were serious, our progress was slow, until some genius conceived the idea that the track, rails and ties, might be lifted from its bed bodily, turned over, and subjected to a high heat; a convenient supply of dry fence-rails would furnish ample fuel to render the rails useless. In this way a good deal of the track was effectively broken up, and communication by rail from Corinth to the south entirely cut off. While we were still busy in wrecking the road, a dash was made at my right and rear by a squadron of Confederate cavalry. This was handsomely met by the reserve under Captain Archibald P. Campbell, of the Second Michigan, who, dismounting a portion of his command, received the enemy with such a volley from his Colt's repeating rifles that the squadron broke and fled in all directions. We were not molested further, and resumed our work, intending to extend the break toward Baldwin, but receiving orders from Elliott to return to Booneville immediately, the men were recalled, and we started to rejoin the main command....