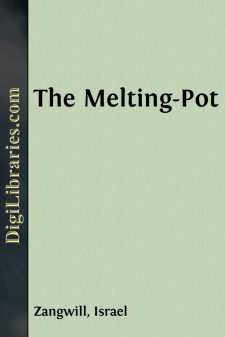 The scene is laid in the living-room of the small home of the Quixanos in the Richmond or non-Jewish borough of New York, about five o'clock of a February afternoon. At centre back is a double street-door giving on a columned veranda in the Colonial style. Nailed on the right-hand door-post gleams a Mezuzah, a tiny metal case, containing a Biblical passage. On the right of the door is a small hat-stand holding Mendel's overcoat, umbrella, etc. There are two windows, one on either side of the door, and three exits, one down-stage on the left leading to the stairs and family bedrooms, and two on the right, the upper leading to Kathleen's bedroom and the lower to the kitchen. Over the street door is pinned the Stars-and-Stripes. On the left wall, in the upper corner of which is a music-stand, are bookshelves of large mouldering Hebrew books, and over them is hung a Mizrach, or Hebrew picture, to show it is the East Wall. Other pictures round the room include Wagner, Columbus, Lincoln, and "Jews at the Wailing place." Down-stage, about a yard from the left wall, stands David's roll-desk, open and displaying a medley of music, a quill pen, etc. On the wall behind the desk hangs a book-rack with brightly bound English books. A grand piano stands at left centre back, holding a pile of music and one huge Hebrew tome. There is a table in the middle of the room covered with a red cloth and a litter of objects, music, and newspapers. The fireplace, in which a fire is burning, occupies the centre of the right wall, and by it stands an armchair on which lies another heavy mouldy Hebrew tome. The mantel holds a clock, two silver candlesticks, etc. A chiffonier stands against the back wall on the right. There are a few cheap chairs. The whole effect is a curious blend of shabbiness, Americanism, Jewishness, and music, all four being combined in the figure of Mendel Quixano, who, in a black skull-cap, a seedy velvet jacket, and red carpet-slippers, is discovered standing at the open street-door. He is an elderly music master with a fine Jewish face, pathetically furrowed by misfortunes, and a short grizzled beard.

Good-bye, Johnny!... And don't forget to practise your scales.

[He yawns, heaves a great sigh of relief, walks toward the table, and perceives a music-roll.]

The chump! He's forgotten his music!

[He picks it up and runs toward the window on the left, muttering furiously]

Here, Johnny! You can't practise your scales if you leave 'em here!

[He throws out the music-roll and shivers again at the cold as he shuts the window.]

Ugh! And I must go out to that miserable dancing class to scrape the rent together.

[He goes to the fire and warms his hands.]

[He drops dejectedly into the armchair. Finding himself sitting uncomfortably on the big book, he half rises and pushes it to the side of the seat. After an instant an irate Irish voice is heard from behind the kitchen door.]

Divil take the butther! I wouldn't put up with ye, not for a hundred dollars a week.

Pots and pans and plates and knives! Sure 'tis enough to make a saint chrazy.

KATHLEEN [Opening door of kitchen toward the end of Frau Quixano's speech, but turning back, with her hand visible on the door]

What's that ye're afther jabberin' about America? If ye don't like God's own counthry, sure ye can go back to your own Jerusalem, so ye can.

KATHLEEN [Bangs her door as she enters excitedly, carrying a folded white table-cloth. She is a young and pretty Irish maid-of-all-work]

Bad luck to me, if iver I take sarvice again with haythen Jews.

[She perceives Mendel huddled up in the armchair, gives a little scream, and drops the cloth.]

Och, I thought ye was out!

And so you dared to be rude to my mother.

KATHLEEN [Angrily, as she picks up the cloth]

She said I put mate on a butther-plate.

Well, you know that's against her religion.

But I didn't do nothing of the soort. I ounly put butther on a mate-plate.

That's just as bad. What the Bible forbids——

KATHLEEN [Lays the cloth on a chair and vigorously clears off the litter of things on the table.]

Sure, the Pope himself couldn't remimber it all....