The Mayor of Troy 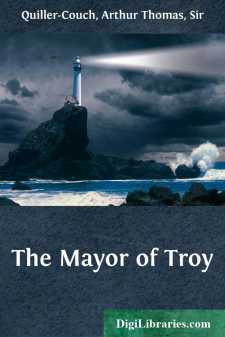 Good wine needs no bush; but this story has to begin with an apology.

Years ago I promised myself to write a treatise on the lost Mayors of Cornwall—dignitaries whose pleasant fame is now night, recalled only by some neat byword or proverb current in the Delectable (or as a public speaker pronounced it the other day, the Dialectable) Duchy. Thus you may hear of "the Mayor of Falmouth, who thanked God when the town jail was enlarged"; "the Mayor of Market Jew, sitting in his own light"; "the Mayor of Tregoney, who could read print upside-down, but wasn't above being spoken to"; "the Mayor of Calenick, who walked two miles to ride one"; "the Mayor of East Looe, who called the King of England 'Brother.'" Everyone remembers the stately prose in which Gibbon records when and how he determined on his great masterpiece, when and how he completed it. "It was at Rome: on the 15th of October, 1764, as I sat musing amidst the ruins of the Capitol, while the bare-footed friars were singing vespers in the Temple of Jupiter, that the idea of writing the Decline and Fall of the City first started in my mind." So I could tell with circumstance when, where and how I first proposed my treatise; and shall, perhaps, when I have concluded it. But life is short; and for the while my readers may be amused with an instalment.

Now of all the Mayors of Cornwall the one who most engaged my speculation, yet for a long while baffled all research, was "the Mayor of Troy, so popular that the town made him Ex-Mayor the year following."

Of course, if you don't know Troy, you will miss half the reason of my eagerness. Simple, egregious, adorable town! Shall I go on here to sing its praises? No; not yet.

The reason why I could learn nothing concerning him is that, soon after 1832, when the Reform Bill did away with Troy's Mayor and Corporation, as well as with its two Members of Parliament, someone made a bonfire of all the Borough records. O Alexandria! And the man said at the time that he did it for fun!

This brings me to yet another Mayor—the Mayor of Lestiddle, who is a jolly good fellow.

Nothing could be handsomer than my calling the Mayor of Lestiddle a jolly good fellow; for in fact we live at daggers drawn. You must know that Troy, a town of small population (two thousand or so) but of great character and importance, stands at the mouth of a river where it widens into a harbour singularly beautiful and frequented by ships of all nations; and that seven miles up this river, by a bridge where the salt tides cease, stands Lestiddle, a town of fewer inhabitants and of no character or importance at all. Now why the Reform Bill, which sheared Troy of its ancient dignities, should have left Lestiddle's untouched, is a question no man can answer me; but this I know, that its Mayor goes flourishing about with a silver mace shaped like an oar, as a symbol of jurisdiction over our river from its mouth (forsooth) so far inland as a pair of oxen yoked together can be driven in its bed....