The Mayas, the Sources of Their History Dr. Le Plongeon in Yucatan, His Account of Discoveries 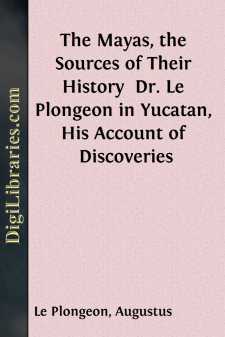 The most comprehensive and accurate map of Yucatan is that which has been copied for this pamphlet. In the several volumes of travel, descriptive of Maya ruins, are to be found plans more or less complete, intended to illustrate special journeys, but they are only partial in their treatment of this interesting country. The Plano de Yucatan, herewith presented—the work of Sr. Dn. Santiago Nigra de San Martin—was published in 1848, and has now become extremely rare. It is valuable to the student, for it designates localities abounding in ruins—those not yet critically explored, as well as those which have been more thoroughly investigated—by a peculiar mark, thus [rectangular box], and it also shows roads and paths used in transportation and communication. Since its publication political changes have caused the division of the Peninsula into the States of Yucatan and Campeachy, which change of boundaries has called for the preparation of a new and improved map. Such an one is now being engraved at Paris and will soon be issued in this country. It is the joint production of Sr. Dn. Joaquin Hubbe and Sr. Dn. Andres Aznar Pérez, revised by Dr. C. Hermann Berendt.

The early history of the central portions of the western hemisphere has particularly attracted the attention of European archæologists, and those of France have already formed learned societies engaged specifically in scientific and antiquarian investigations in Spanish America. It is to the French that credit for the initiative in this most interesting field of inquiry is especially due, presenting an example which can not fail to be productive of good results in animating the enthusiasm of all engaged in similar studies.

The Société Américaine de France (an association, like our own, having the study of American Antiquities as a principal object, and likely to become prominent in this field of inquiry), has already been briefly mentioned by our Librarian; but the reception of the Annuaire for 1873, and a statement of the present condition of the Society in the Journal des Orientalistes of February 5, 1876, gives occasion for a more extended notice. The Society was founded in 1857; and among those most active in its creation were M. Brasseur de Bourbourg, M. Léon de Rosny, and M. Alfred Maury. The objects of the association, as officially set forth, were, first, the publication of the works and collections of M. Aubin, the learned founder of a theory of American Archæology, which it was hoped would throw much light upon the hieroglyphical history of Mexico before the conquest; second, the publication of grammars and dictionaries of the native languages of America; third, the foundation of professorships of History, Archæology, and American Languages; and fourth, the creation, outside of Paris, of four Museums like the Museum of Saint Germain, under the auspices of such municipalities as encourage their foundation, as follows:

The list of members contains the names of distinguished archæologists in Europe, and a foreign membership already numerous; and it is contemplated to add to this list persons interested in kindred studies from all parts of the civilized world. The publications of the Society, and those made under its auspices, comprehend, among others, Essai sur le déchiffrement de l’Ecriture hiératique de l’Amérique Centrale, by M. Léon de Rosny, President of the Society, 1 vol. in folio, with numerous plates: This work treats critically the much controverted question of the signification of Maya characters, and furnishes a key for their interpretation. Also, Chronologie hiéroglyphico phonétique des Rois Aztéques de 1352 à 1522, retrouvée dans diverses mappes américaines antiques, expliquée et précédée d’une introduction sur l’Écriture mexicaine, by M. Edouard Madier de Montjau. The archæology of the two Americas, and the ethnography of their native tribes, their languages, manuscripts, ruins, tombs and monuments, fall within the scope of the Society, which it is their aim to make the school and common centre of all students of American pre-Columbian history....