The Martial Adventures of Henry and Me 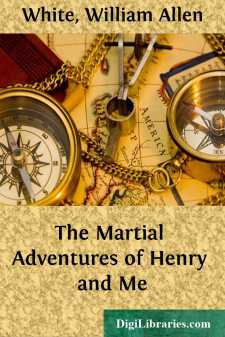 CHAPTER I IN WHICH WE BEGIN OUR SENTIMENTAL JOURNEY

By rights Henry, being the hero of this story, should be introduced in the first line. But really there isn't so much to say about Henry—Henry J. Allen for short, as we say in Kansas—Henry J. Allen, editor and owner of the Wichita Beacon. And to make the dramatis personae complete, we may consider me as the editor of the Emporia Gazette, and the two of us as short, fat, bald, middle-aged, inland Americans, from fresh water colleges in our youth and arrived at New York by way of an often devious, yet altogether happy route, leading through politics where it was rough going and unprofitable for years; through business where we still find it easy to sign, possible to float and hard to pay a ninety-day note, and through two country towns; one somewhat less than one hundred thousand population, and Emporia slightly above ten thousand.

We are discovered in the prologue to the play in New York City wearing our new silk suits to give New York a treat on a hot August day. Not that we or any one else ever wears silk suits in any Wichita or Emporia; silk suits are bought by Wichita people and Emporians all over the earth to paralyse the natives of the various New Yorks.

In our pockets we hold commissions from the American Red Cross. These commissions are sending us to Europe as inspectors with a view to publicity later, one to speak for the Red Cross, the other to write for it in America. We have been told by the Red Cross authorities in Washington that we shall go immediately to the front in France and that it will be necessary to have the protective colouring of some kind of an army uniform. The curtain rises on a store in 43rd Street in New York—perhaps the "Palace" or the "Hub" or the "Model" or the "Army and Navy," where a young man is trying to sell us a khaki coat, and shirt and trousers for $17.48. And at that it seems a lot of money to pay for a rig which can be worn at most only two months. But we compromise by making him throw in another shirt and a service hat and we take the lot for $17.93 and go away holding in low esteem the "pride, pomp and circumstance of glorious war" as exemplified by these military duds. In our hearts as we go off at R. U. E. will be seen a hatred for uniforms as such, and particularly for phoney uniforms that mean nothing and cost $18.00 in particular.

[Illustration with caption: And at that it seems a lot of money to pay for a rig which can be worn at most only two months]

And then, with a quick curtain, the good ship Espagne, a French liner, is discovered in New York harbour the next day with Henry and me aboard her, trying to distinguish as she crawfishes out of the dock, the faces of our waving friends from the group upon the pier.

The good ship Espagne is all steamed up and scooting through the night, with two or three hundred others of the cast of characters aboard; and there is Europe and the war in the cast of characters, and the Boche, and Fritzie and the Hun, that diabolic trinity of evil, and just back of the boat on the scenery of the first act, splattered like guinea freckles all over the American map for three thousand miles north, south, east and west, are a thousand replicas of Wichita and Emporia....