The Man Without a Country and Other Tales 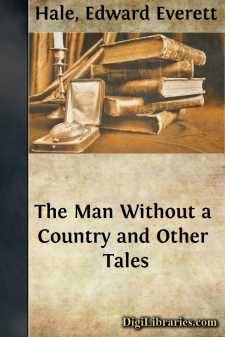 THE MAN WITHOUT A COUNTRY. FROM THE INGHAM PAPERS.

This story was written in the summer of 1863, as a contribution, however humble, towards the formation of a just and true national sentiment, or sentiment of love to the nation. It was at the time when Mr. Vallandigham had been sent across the border. It was my wish, indeed, that the story might be printed before the autumn elections of that year,—as my "testimony" regarding the principles involved in them,—but circumstances delayed its publication till the December number of the Atlantic appeared.

It is wholly a fiction, "founded on fact." The facts on which it is founded are these,—that Aaron Burr sailed down the Mississippi River in 1805, again in 1806, and was tried for treason in 1807. The rest, with one exception to be noticed, is all fictitious.

It was my intention that the story should have been published with no author's name, other than that of Captain Frederic Ingham, U.S.N. Whether writing under his name or my own, I have taken no liberties with history other than such as every writer of fiction is privileged to take,—indeed, must take, if fiction is to be written at all.

The story having been once published, it passed out of my hands. From that moment it has gradually acquired different accessories, for which I am not responsible. Thus I have heard it said, that at one bureau of the Navy Department they say that [pg 006] Nolan was pardoned, in fact, and returned home to die. At another bureau, I am told, the answer to questions is, that, though it is true that an officer was kept abroad all his life, his name was not Nolan. A venerable friend of mine in Boston, who discredits all tradition, still recollects this "Nolan court-martial." One of the most accurate of my younger friends had noticed Nolan's death in the newspaper, but recollected "that it was in September, and not in August." A lady in Baltimore writes me, I believe in good faith, that Nolan has two widowed sisters residing in that neighborhood. A correspondent of the Philadelphia Despatch believed "the article untrue, as the United States corvette 'Levant' was lost at sea nearly three years since, between San Francisco and San Juan." I may remark that this uncertainty as to the place of her loss rather adds to the probability of her turning up after three years in Lat. 2° 11' S., Long. 131° W. A writer in the New Orleans Picayune, in a careful historical paper, explained at length that I had been mistaken all through; that Philip Nolan never went to sea, but to Texas; that there he was shot in battle, March 21, 1801, and by orders from Spain every fifth man of his party was to be shot, had they not died in prison. Fortunately, however, he left his papers and maps, which fell into the hands of a friend of the Picayune's correspondent. This friend proposes to publish them,—and the public will then have, it is to be hoped, the true history of Philip Nolan, the man without a country.

With all these continuations, however, I have nothing to do....