The Man Who Stole A Meeting-House 1878, From "Coupon Bonds" 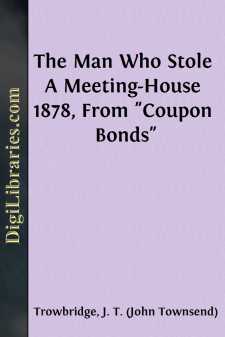 On a recent journey to the Pennsylvania oil regions, I stopped one evening with a fellow-traveler at a village which had just been thrown into a turmoil of excitement by the exploits of a horse-thief. As we sat around the tavern hearth, after supper, we heard the particulars of the rogue's capture and escape fully discussed; then followed many another tale of theft and robbery, told amid curling puffs of tobacco-smoke; until, at the close of an exciting story, one of the natives turned to my traveling acquaintance, and, with a broad laugh, said, "Kin ye beat that, stranger?"

"Well, I don't know—maybe I could if I should try. I never happened to fall in with any such tall horse-stealing as you tell of, but I knew a man who stole a meeting-house once."

"Stole a meetin'-house! That goes a little beyant anything yit," remarked another of the honest villagers. "Ye don't mean he stole it and carried it away?"

"Stole it and carried it away," repeated my traveling companion, seriously, crossing his legs, and resting his arm on the hack of his chair. "And, more than all that, I helped him."

"How happened that?—for you don't look much like a thief yourself." All eyes were now turned upon my friend, a plain New England farmer, whose honest homespun appearance and candid speech commanded respect.

"I was his hired man, and I acted under orders. His name was Jedwort—Old Jedwort, the boys called him, although he wasn't above fifty when the crooked little circumstance happened which I'll make as straight a story of as I can, if the company would like to hear it."

"Sartin, stranger! sartin! about stealin' the meetin'-house!" chimed in two or three voices.

My friend cleared his throat, put his hair behind his ears, and with a grave, smooth face, but with a merry twinkle in his shrewd gray eye, began as follows:

"Jedwort I said his name was; and I shall never forget how he looked one particular morning. He stood leaning on the front gate—or rather on the post, for the gate itself was such a shackling concern a child couldn't have leaned on't without breaking it down. And Jedwort was no child. Think of a stoutish, stooping, duck-legged man, with a mountainous back, strongly suggestive of a bag of grist under his shirt, and you have him. That imaginary grist had been growing heavier and heavier, and he more and more bent under it, for the last fifteen years and more, until his head and neck just came forward out from between his shoulders like a turtle's from its shell. His arms hung, as he walked, almost to the ground. Being curved with the elbows outward, he looked for all the world, in a front view, like a waddling interrogation-point inclosed in a parenthesis. If man was ever a quadruped, as I've heard some folks tell, and rose gradually from four legs to two, there must have been a time, very early in his history, when he went about like Old Jedwort.

"The gate had been a very good gate in its day. It had even been a genteel gate when Jedwort came into possession of the place by marrying his wife, who inherited it from her uncle. That was some twenty years before, and everything had been going to rack and ruin ever since.

"Jedwort himself had been going to rack and ruin, morally speaking. He was a middling decent sort of man when I first knew him; and I judge there must have been something about him more than common, or he never could have got such a wife. But then women do marry, sometimes, unaccountably. I've known downright ugly and disagreeable fellows to work around, till by and by they would get a pretty girl fascinated by something in them which nobody else could see, and then marry her in spite of everything;—just as you may have seen a magnetizer on the stage make his subjects do just what he pleased, or a black snake charm a bird....