The Man Who Rose Again 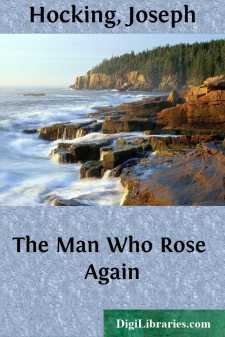 Four men sat in the smoking-room of a London club. They were alone. That is scarcely to be wondered at, for it was far past midnight. Moreover, it was not a large club, and even when the place was most frequented large numbers were seldom present. Three of the men were chatting cursorily about a defeat of the Government which had taken place that night, but the fourth, by far the most striking looking man of the quartette, sat almost by himself, moody and silent.

They were all young men. The oldest had barely reached his thirty-fifth year, while the youngest was evidently less than thirty. All of them gave evidence of being young men of leisure, and each of them could claim to belong to that class which is vaguely termed English gentlemen.

"Will the Government resign, think you?" said one.

"Why? It could hardly be called a snatch division."

"No, but governments do not resign unless the country is against them."

"In a sense, yes; but in another sense, no. The question to-night was a brewer's question. Well, if they resigned and went to the country, they would be returned again. The brewers, for whom the Government has been fighting, would be sufficiently strong at the polls to secure the return of their supporters."

"Which is a strong reason why the Government will resign."

They went on discussing the question, neither saying anything worthy of record. They seemed to be deeply interested, however; perhaps because two of them were Parliamentary candidates. The man who sat apart, however, took no note of the conversation. He could by listening carefully have heard all that was said, but his mind seemed elsewhere. Neither did he speak to the others, although he knew each one intimately. Of what he was thinking it would be difficult to tell. There was a strange, vacant look in his eyes, and his face was very pale.

He seemed utterly oblivious of the time, and although a waiter hovered near, as if to remind the party that he was very sleepy, this young man especially took no note of his presence.

Presently he aroused himself, and rang a bell which stood on the table at his elbow.

The waiter came towards him sleepily.

"And make haste about it."

The waiter left the room, while the others glanced at each other significantly.

"How many is that to-night?" said one in a low voice.

"If I'd taken half he's had, I should have to be carried to bed."

"I don't know. He never shows he's been drinking. He's always at his best when he's drunk."

"Well, you know what I mean. He can never do himself justice now, unless he's had what would make any one of us incapable."

"Yes, but that kind of thing can't last. No constitution could stand it. In time it'll destroy his nerves, and then——"

The waiter brought the young man a large measure of whisky and a bottle of soda-water....