The Man of Letters as a Man of Business 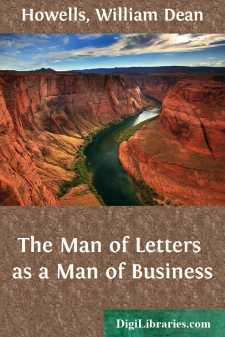 I think that every man ought to work for his living, without exception, and that when he has once avouched his willingness to work, society should provide him with work and warrant him a living. I do not think any man ought to live by an art. A man's art should be his privilege, when he has proven his fitness to exercise it, and has otherwise earned his daily bread; and its results should be free to all. There is an instinctive sense of this, even in the midst of the grotesque confusion of our economic being; people feel that there is something profane, something impious, in taking money for a picture, or a poem, or a statue. Most of all, the artist himself feels this. He puts on a bold front with the world, to be sure, and brazens it out as Business; but he knows very well that there is something false and vulgar in it; and that the work which cannot be truly priced in money cannot be truly paid in money. He can, of course, say that the priest takes money for reading the marriage service, for christening the new-born babe, and for saying the last office for the dead; that the physician sells healing; that justice itself is paid for; and that he is merely a party to the thing that is and must be. He can say that, as the thing is, unless he sells his art he cannot live, that society will leave him to starve if he does not hit its fancy in a picture, or a poem, or a statue; and all this is bitterly true. He is, and he must be, only too glad if there is a market for his wares. Without a market for his wares he must perish, or turn to making something that will sell better than pictures, or poems, or statues. All the same, the sin and the shame remain, and the averted eye sees them still, with its inward vision. Many will make believe otherwise, but I would rather not make believe otherwise; and in trying to write of Literature as Business I am tempted to begin by saying that Business is the opprobrium of Literature.

Literature is at once the most intimate and the most articulate of the arts. It cannot impart its effect through the senses or the nerves as the other arts can; it is beautiful only through the intelligence; it is the mind speaking to the mind; until it has been put into absolute terms, of an invariable significance, it does not exist at all. It cannot awaken this emotion in one, and that in another; if it fails to express precisely the meaning of the author, if it does not say HIM, it says nothing, and is nothing. So that when a poet has put his heart, much or little, into a poem, and sold it to a magazine, the scandal is greater than when a painter has sold a picture to a patron, or a sculptor has modelled a statue to order. These are artists less articulate and less intimate than the poet; they are more exterior to their work; they are less personally in it; they part with less of themselves in the dicker. It does not change the nature of the case to say that Tennyson and Longfellow and Emerson sold the poems in which they couched the most mystical messages their genius was charged to bear mankind. They submitted to the conditions which none can escape; but that does not justify the conditions, which are none the less the conditions of hucksters because they are imposed upon poets. If it will serve to make my meaning a little clearer we will suppose that a poet has been crossed in love, or has suffered some real sorrow, like the loss of a wife or child. He pours out his broken heart in verse that shall bring tears of sacred sympathy from his readers, and an editor pays him a hundred dollars for the right of bringing his verse to their notice. It is perfectly true that the poem was not written for these dollars, but it is perfectly true that it was sold for them. The poet must use his emotions to pay his provision bills; he has no other means; society does not propose to pay his bills for him. Yet, and at the end of the ends, the unsophisticated witness finds the transaction ridiculous, finds it repulsive, finds it shabby. Somehow he knows that if our huckstering civilization did not at every moment violate the eternal fitness of things, the poet's song would have been given to the world, and the poet would have been cared for by the whole human brotherhood, as any man should be who does the duty that every man owes it.

The instinctive sense of the dishonor which money-purchase does to art is so strong that sometimes a man of letters who can pay his way otherwise refuses pay for his work, as Lord Byron did, for a while, from a noble pride, and as Count Tolstoy has tried to do, from a noble conscience. But Byron's publisher profited by a generosity which did not reach his readers; and the Countess Tolstoy collects the copyright which her husband foregoes; so that these two eminent instances of protest against business in literature may be said not to have shaken its money basis. I know of no others; but there may be many that I am culpably ignorant of....