The Man from Jericho 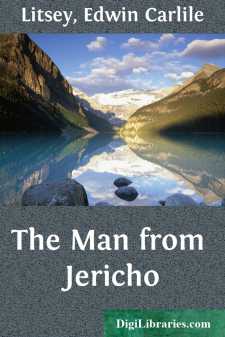 There had been a thunder-shower in the middle of the afternoon, but it had passed away about five o'clock, accompanied by sullen rumbles and intermittent flashes of uncertain lightning. Then the sun burst forth and poured its light over the drenched Kentucky landscape. It showed millions of diamonds and pearls strung upon the bending blades of bluegrass; broad expanses of molten silver where the ponds lay, and smaller mirrors of the same metal where puddles had formed from the recent downpour. It showed boundless hoards of gold where the nasturtiums were banked in a crimson mass, and the mottled bells of the rank trumpet-vines sent forth a silent summons to the answering sunshine. In the vivid green of a large oak tree a pair of orioles wove a wonderful pattern of living flame as they darted about among the boughs. Two honey-bees crawled out upon the tiny porch of their little home, and, being assured by the instinct which God gave them that the storm was over, arose on buzzing wings to seek some distant store of sweets.

His attention being drawn by the sunlight bursting suddenly through the window of the library where he sat reading—to be exact, it fell upon the open page before his eyes—Major Thomas Dudley closed the book, leaving one long forefinger between the leaves to mark the spot where he had been interrupted, and turned to look outdoors. The scene which was spread before him brought a peaceful but sad smile to his face. For two hundred feet or more the broad yard sloped very gently down to the highway, from which it was separated by an iron fence of ornamental design, but now much worn, and sadly bent and twisted in places. This yard was carpeted with a luxuriant expanse of bluegrass in which no alien growth was allowed to find root. There were a number of majestic trees, of the oak and maple variety, and a few shrubs, nicely trimmed. A gravel driveway came up one side from the road, led by the old portico in front, and from thence disappeared towards the rear in the direction of the stable. Through the open window came the odour of honeysuckle, heavy and sweet; the vine grew near the corner of the house. It was not a very sightly shrub, and it marred the wonderful correctness of the lawn no little, but the Major had his reasons for letting it alone. As a matter of fact, the Major's wife had planted it many years before, when their love-dream was at its height. Now she was gone, but it remained, and it helped to keep fresh and vigorous the memories which made Thomas Dudley's daily life a benediction to all who came within its radius.

As the perfume from the tiny white and yellow flowers crept subtly to his nostrils—fine, delicate nostrils they were, like those of a well-bred horse—a hungry, beseeching look stole over the old gentleman's face. He leaned forward and placed one hand upon the window-sill, while his eyes half closed, and his countenance became transfigured. Then, had any been watching, they would have seen his lips move, as though they were shaping words.

At this point the sound of shuffling feet was heard coming from the hall running through the center of the house. Another moment a throat was cleared in the doorway, and an apologetic voice spoke.

"Peter! Peter! What's this you're telling me? The Prince eating again!"

With remarkable activity the Major arose to his feet and faced about, eyeing with undisguised elation the figure in the doorway. It was that of a very old negro, bowlegged and bent. His face was brown, wrinkled and kindly in expression, with tiny corkscrews of gray hair, each totally isolated, dispersed over it. His head was flat and bald, but for a fringe of white wool shaped like the tonsure of a monk. He wore a rusty pair of trousers, so patched that it was impossible to tell what their original material had been; a brown hickory shirt tolerably new, and suspenders made of strips of bed-ticking....