The Man and the Moment 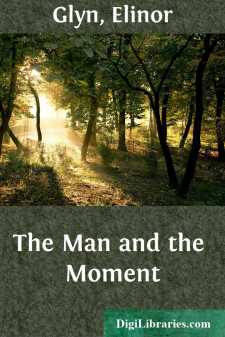 When a young, rich and good-looking man says that particular word aloud with a fearful grind of the teeth, one may know that he is in the very devil of a temper!

And, to be sure, he had ample reason, as you, my friend, who may happen to have begun this tale, will presently see.

It is really most irritating to be suddenly confronted with the consequences of one's follies at any age, but at twenty-four, when otherwise the whole life is smiling for one, it seems quite too hard.

The frightful language this well-endowed young gentleman now indulged in, half aloud and half in thought, would be quite impossible to put on paper! It contained what almost amounted to curses for a certain lady whose appearance, could she have been seen at this moment, suggested that of a pious little saint.

"How the h—— can I keep from marrying her!" Mr. Arranstoun said more than aloud this time, and then kicking an innocent footstool across the room, he called his bulldog, put on his cap and stamped out on to the old stone balcony which opened from this apartment, and was soon stalking down the staircase and across the lawn to a little door in the great fortified wall, which led into the park.

He had hardly left the room when, from the wide arched doorway of his bed-chamber beyond, there entered Mr. Johnson, his superior valet, carrying some riding-boots and a silk shirt over his arm. You could see through the open door that it was a very big and comfortable bedroom, which had evidently been adapted to its present use from some much more stately beginning. A large, vaulted chamber it was, with three narrow windows looking on to the grim courtyard beneath.

Michael Arranstoun had selected this particular suite for himself when his father died ten years before, and his mother was left to spoil him, until she, too, departed from this world when he was sixteen.

What a splendid inheritance he had come into! This old border castle up in the north—and not a mortgage on the entire property! While, from his mother, a number of solid golden sovereigns flowed into his coffers every year—obtained by trade! That was a little disgusting for the Arranstouns—but extremely useful.

It might have been from this same strain that the fortunate young man had also inherited that common sense which made him fairly level-headed, and not given as a rule to any over-mad taste.

The Arranstouns had been at Arranstoun since the time of those tiresome Picts and Scots—and for generations they had raided their neighbors' castles and lands, and carried off their cattle and wives and daughters and what not! They had seized anything they fancied, and were a strong, ruthless, brutal race, not much vitiated by civilization. These instincts of seizing what they wanted had gone on in them throughout eleven hundred years and more, and were there until this day, when Michael, the sole representative of this branch of the family, said "Damn!" and kicked a footstool across the room into the grate.

Mr. Johnson was quite aware of the peculiarity of the family. Indeed, he was not surprised when Alexander Armstrong remarked upon it presently. Alexander Armstrong was the old retainer, who now enjoyed the position of guide to the Castle upon the two days a week when tourists were allowed to walk through the state rooms, and look at the splendid carvings and armor and pictures, and the collection of plate.

Johnson had had time to glance over his master's correspondence that morning, which, with characteristic recklessness, that gentleman had left upon his bed while he went to his bath, so his servant knew the cause of his bad temper, and had been prudent and kept a good deal out of the way. But the news was so interesting, he felt Alexander Armstrong really ought to share the thrill....