The Making Of A Novelist An Experiment In Autobiography 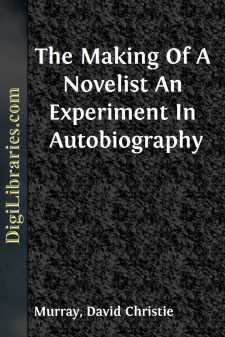 Every man who writes about himself is, on the face of the matter, obnoxious to the suspicion which haunts the daily pathway of the Bore. To talk of self and not be offensive demands an art which is not always given to man. And yet we are always longing to get near each other and to understand each other; and in default of a closer communion with our living fellows we take to our bosoms the shadows of fiction and the stage. If the real man could be presented to us by any writer of his own history we should all hail him with enthusiasm.

Pepys, of course, came nearer than anybody else; but this is only because he wrote for his own reading and meant to keep himself a secret. Dickens exquisitely veils and unveils his own personality and career in Copperfield, and scores of smaller writers have done the same thing in fiction to our great pleasure. But to set down boldly, openly, and as a fact for general publication the things of one's own doing, saying, and thinking is an impertinence whose only justification can be found in the public approval. If Pepys had written his Diary for publication he would have been left to oblivion as a driveller. But we surprise the man's secret, we see what he never meant to show us, the peering jackdaw instinct is satisfied; and we feel, besides, a certain sense of humorous pity and affectionate disdain which the man himself, had we known him in life as we know him in his book, could never have excited. Rousseau, to me, is flatly intolerable, because he meant to tell the world what every man should have the decency to hide.

The perfect autobiography is yet to seek, and will probably never be written. A partial solution of a difficulty is offered in this experimental booklet. It is offered without diffidence, because it is offered in perfect modesty. I have tried to show how one particular novelist was made; where he got some of his experiences, and in what varying fashions the World and Fate have tried to teach him his business. It has been my effort to do this in the least egotistical and the most straightforward fashion. The narrative is quite informal and wanders where it will; but in its serial publication it received marked favour from an indulgent public, and I like to give it an equal chance of permanence with the rest of my writings, which I trust will not convey the notion that I covet a too-exaggerated longevity. Should the public favour continue, the field of experience is wide; and I may repeat Dick Swiveller's saying to Mr. Quilp—'There is plenty more in the shop this comes from.'

THE MAKING OF A NOVELIST I

Only a day or two ago I found myself arrested on my eastward way along the Strand by the hand of a friend upon my shoulder. We chatted for a minute or two, and I found that I was in front of Lipscombe's window. A ball of cork, which has had a restless time of it for many years, was dodging up and down the limits of a glass shade, tossed by a jet of water. The sight of it carried me back twenty years in a flash....