The Magic Fishbone A Holiday Romance from the Pen of Miss Alice Rainbird, Aged 7 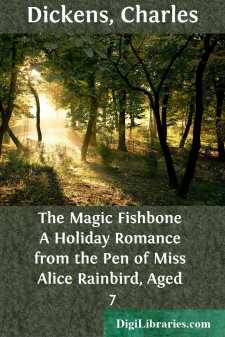 Add to My Favorites
Published: 9 years ago
Downloads: 50
Rating: (1 Vote)

The story contained herein was written by Charles Dickens in 1867. It is the second of four stories entitled “Holiday Romance” and was published originally in a children’s magazine in America. It purports to be written by a child aged seven. It was republished in England in “All the Year Round” in 1868. For this and four other Christmas pieces Dickens received £1,000.

“Holiday Romance” was published in book form by Messrs Chapman & Hall in 1874, with “Edwin Drood” and other stories.

For this reprint the text of the story as it appeared in “All the Year Round” has been followed.

several of the children were growing out of their clothes

There was once a King, and he had a Queen; and he was the manliest of his sex, and she was the loveliest of hers. The King was, in his private profession, Under Government. The Queen’s father had been a medical man out of town.

They had nineteen children, and were always having more. Seventeen of these children took care of the baby; and Alicia, the eldest, took care of them all. Their ages varied from seven years to seven months.

Let us now resume our story.

One day the King was going to the office, when he stopped at the fishmonger’s to buy a pound and a half of salmon not too near the tail, which the Queen (who was a careful housekeeper) had requested him to send home. Mr Pickles, the fishmonger, said, “Certainly, sir, is there any other article, Good-morning.”

The King went on towards the office in a melancholy mood, for quarter day was such a long way off, and several of the dear children were growing out of their clothes. He had not proceeded far, when Mr Pickles’s errand-boy came running after him, and said, “Sir, you didn’t notice the old lady in our shop.”

Now, the King had not seen any old lady, because this old lady had been invisible to him, though visible to Mr Pickles’s boy. Probably because he messed and splashed the water about to that degree, and flopped the pairs of soles down in that violent manner, that, if she had not been visible to him, he would have spoilt her clothes.

Just then the old lady came trotting up. She was dressed in shot-silk of the richest quality, smelling of dried lavender.

“King Watkins the First, I believe?” said the old lady.

“Papa, if I am not mistaken, of the beautiful Princess Alicia?” said the old lady.

“And of eighteen other darlings,” replied the King.

“Listen. You are going to the office,” said the old lady.

It instantly flashed upon the King that she must be a Fairy, or how could she know that?

“You are right,” said the old lady, answering his thoughts, “I am the Good Fairy Grandmarina. Attend. When you return home to dinner, politely invite the Princess Alicia to have some of the salmon you bought just now.”

“It may disagree with her,” said the King.

The old lady became so very angry at this absurd idea, that the King was quite alarmed, and humbly begged her pardon....