The Magic Egg and Other Stories 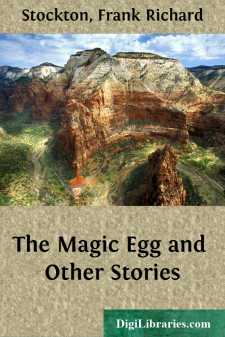 The pretty little theatre attached to the building of the Unicorn Club had been hired for a certain January afternoon by Mr. Herbert Loring, who wished to give therein a somewhat novel performance, to which he had invited a small audience consisting entirely of friends and acquaintances.

Loring was a handsome fellow about thirty years old, who had travelled far and studied much. He had recently made a long sojourn in the far East, and his friends had been invited to the theatre to see some of the wonderful things he had brought from that country of wonders. As Loring was a club-man, and belonged to a family of good social standing, his circle of acquaintances was large, and in this circle a good many unpleasant remarks had been made regarding the proposed entertainment—made, of course, by the people who had not been invited to be present. Some of the gossip on the subject had reached Loring, who did not hesitate to say that he could not talk to a crowd, and that he did not care to show the curious things he had collected to people who would not thoroughly appreciate them. He had been very particular in regard to his invitations.

At three o'clock on the appointed afternoon nearly all the people who had been invited to the Unicorn Theatre were in their seats. No one had stayed away except for some very good reason, for it was well known that if Herbert Loring offered to show anything it was worth seeing.

About forty people were present, who sat talking to one another, or admiring the decoration of the theatre. As Loring stood upon the stage—where he was entirely alone, his exhibition requiring no assistants—he gazed through a loophole in the curtain upon a very interesting array of faces. There were the faces of many men and women of society, of students, of workers in various fields of thought, and even of idlers in all fields of thought; but there was not one which indicated a frivolous or listless disposition. The owners of those faces had come to see something, and they wished to see it.

For a quarter of an hour after the time announced for the opening of the exhibition Loring peered through the hole in the curtain, and then, although all the people he had expected had not arrived, he felt it would not do for him to wait any longer. The audience was composed of well-bred and courteous men and women, but despite their polite self-restraint Loring could see that some of them were getting tired of waiting. So, very reluctantly, and feeling that further delay was impossible, he raised the curtain and came forward on the stage.

Briefly he announced that the exhibition would open with some fireworks he had brought from Corea. It was plain to see that the statement that fireworks were about to be set off on a theatre stage, by an amateur, had rather startled some of the audience, and Loring hastened to explain that these were not real fireworks, but that they were contrivances made of colored glass, which were illuminated by the powerful lens of a lantern which was placed out of sight, and while the apparent pyrotechnic display would resemble fireworks of strange and grotesque designs, it would be absolutely without danger....