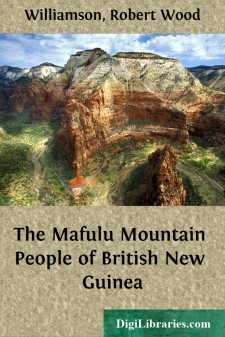 The appended to this volume is (with the exception of the red lines and red lettering upon it) a reproduction of a portion of the map relating to the explorations and surveys of Dr. Strong, Mr. Monckton and Captain Barton, which was published in the Geographical Journal for September, 1908, and the use of which has been kindly permitted me by the Royal Geographical Society. I have eliminated the red route lines which appear in the original map, so as to avoid confusion with the red lines which I have added. The unbroken red lines and the red lettering upon my map are copied from a map, also kindly placed at my disposal, which has been recently prepared by Father Fillodean of the Mission of the Sacred Heart, and these lines mark roughly what the Fathers of the Mission believe to be the boundaries of the several linguistic areas within the district covered by their map. It will be observed that some of these lines are not continued so as to surround and complete the definition of the areas which they indicate; but this defect is unavoidable, as the Fathers’ map only covered a relatively small area, and even in that map the lines were not all carried to its margin. It will also be noticed that, though the Fathers introduce the two names Oru Lopiku and Boboi as being linguistically distinct, they have not indicated the boundary line between the two areas. Father Egedi, however, informed me that this boundary passes along the ridge of hills south of the Ufafa river as far as Mt. Eleia, and thence along the Ukalama river to the Kuni boundary. The Ukalama river is not shown in the Geographical Society’s map; but I may say that it is shown in the Fathers’ map as rising in Mt. Eleia, and flowing thence in a south-easterly direction, and so joining the St. Joseph river close to Dilava. The broken red line upon my map does not appear in the Fathers’ map, but has been added by me to indicate what, I understand, the Fathers believe to be a continued boundary, so far as ascertained, of the Fuyuge linguistic area, called by them the Mafulu area, to which I am about to draw attention.

The term Mafulu is the Kuni pronunciation of Mambule, which is the name, as used by themselves, of the people who live in a group of villages within and near the north-westerly corner of the area of the Fuyuge-speaking people, whose Papuan language, so far as ascertained, appears, subject to local dialectal differences, to be the same, and may, I was informed, be regarded as one common language throughout the Fuyuge area.

The Fathers of the Mission have adopted the name Mafulu in a wider sense, as including all the people with whom they have come in contact of the Fuyuge-speaking area; and, though my investigations, which form the subject-matter of this book, have been conducted only in the neighbourhood of Mafulu itself, I was assured that, so far as the Fathers have been able to ascertain, all these Fuyuge people not only have similar languages, but also are substantially similar in physique and in culture....