The Macdermots of Ballycloran 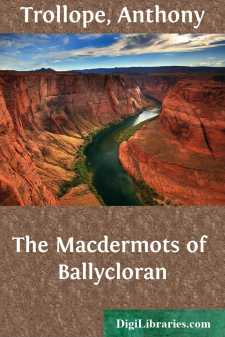 CHAPTER I. BALLYCLORAN HOUSE AS FIRST SEEN BY THE AUTHOR.

In the autumn, 184—, business took me into the West of Ireland, and, amongst other places, to the quiet little village of Drumsna, which is in the province of Connaught, County Leitrim, about 72 miles w.n.w. of Dublin, on the mail-coach road to Sligo. I reached the little inn there in the morning by the said mail, my purpose being to leave it late in the evening by the day coach; and as my business was but of short duration, I was left, after an early dinner, to amuse myself. Now, in such a situation, to take a walk is all the brightest man can do, and the dullest always does the same. There is a kind of gratification in seeing what one has never seen before, be it ever so little worth seeing; and the gratification is the greater if the chances be that one will never see it again. Now Drumsna stands on a bend in the Shannon; the street leads down to a bridge, passing over which one finds oneself in the County Roscommon; and the road runs by the well-wooded demesne of Sir G—— K——; moreover there is a beautiful little hill, from which the demesne, river, bridge, and village can all be seen; and what farther agremens than these could be wanted to make a pretty walk? But, alas! I knew not of their existence then. One cannot ask the maid at an inn to show one where to find the beauties of nature. So, trusting to myself, I went directly away from river, woods, and all,—along as dusty, ugly, and disagreeable a road as is to be found in any county in Ireland.

After proceeding a mile or so, taking two or three turns to look for improvement, I began to perceive evident signs on the part of the road of retrograding into lane-ism; the county had evidently deserted it, and though made for cars and coaches, its traffic appeared to be now confined to donkeys carrying turf home from the bog, in double kishes on their back. Presently the fragments of a bridge presented themselves, but they too were utterly fallen away from their palmy days, and in their present state afforded but indifferent stepping-stones over a bog stream which ran, or rather crept, across the road. These, however, I luckily traversed, and was rewarded by finding a broken down entrance to a kind of wood on the right hand. In Ireland, particularly in the poorer parts—to rank among which, County Leitrim has a right which will not be disputed—a few trees together are always the recognised sign of a demesne, of a gentleman's seat, or the place where a gentleman's seat has been; and I directly knew that this must be a demesne. But ah! how impoverished, if one might judge from outward appearances. Two brick pillars, from which the outside plaster had peeled off and the coping fallen, gave evidence of former gates; the space was closed up with a loose built wall, but on the outer side of each post was a little well worn footpath, made of soft bog mould. I of course could not resist such temptation, and entered the demesne. The road was nearly covered with that short dry grass which stones seem to throw up, when no longer polished by the wealthier portion of man or brute kind....