The Lutherans of New York Their Story and Their Problems 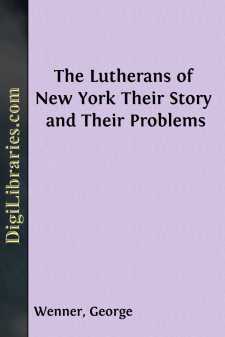 For the sake of non-Lutheran readers it may be well, in a sketch of the story and problems of our churches, to present a short statement of their principles and to indicate in what respect these differ from the general attitude and beliefs of other churches. In doing so however the author does not presume to encroach upon the field belonging to the scholars of the church. He is not an expert theologian. What he has to say upon this subject can only be taken as the opinion of a workaday pastor who, in practical experience, has obtained an acquaintance with the teachings of the church which it is his privilege to serve. For a clearer understanding of disputed points the reader is referred to the books of reference named in the Bibliography.

Many otherwise well-read people, while admitting that Lutherans are Protestants, suspect that their system is still imbued with the leaven of Romanism. In their classification of churches they are disposed to place us among Ritualists, Sacerdotalists and Crypto-Romanists.

We do not expect to reverse at once the preference of most American Protestants in favor of the Reformed system. But since we have had no inconsiderable share in the shaping of modern history, we are confident that our principles will in due time receive the consideration to which any historical development is entitled. We would like to be understood, or at least not to be misunderstood, by our fellow Christians.

But our chief desire is to inspire our own young people with an intelligent devotion to the faith of their fathers and to persuade them of its conformity with historical, believing Christianity.

The origin of Lutheranism we are accustomed to assign to the sixteenth century. We associate it with the nailing of the 95 theses to the church door at Wittenberg, or with Luther's defence at the Diet of Worms, or with the Confession of the Evangelicals at Augsburg in 1530.

These events were indeed dramatic indications of a great change, but they were only the culmination of a process that had been going on for ages. It was a re-formation of the ancient Catholic Church and a return to the original principles of the Gospel.

"The Church had become an enormous labyrinthine structure which included all sorts of heterogeneous matters, the Gospel and holy water, the universal priesthood and the pope on his throne, the Redeemer and Saint Anna, and called it religion. Over against this vast accumulation of the ages, against which many times ineffective protest had been made, the Lutheran Reformation insisted on reducing religion to its simplest terms, faith and the word of God."* *Harnack, Wesen des Christenthums.

The traditional conception of the Church with all its apparatus and claims of authority it repudiated, and in the few and simple statements of the seventh article of the Augustana, it set forth its doctrine of the Church:

"Also they teach, that One holy Church is to continue forever....