The Loves of Great Composers 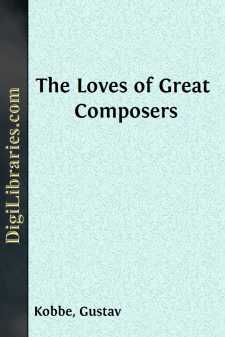 Mozart and His Constance

Nearly eight years after Mozart's death his widow, in response to a request from a famous publishing house for relics of the composer, sent, among other Mozartiana, a packet of letters written to her by her husband. In transmitting these she wrote:

"Especially characteristic is his great love for me, which breathes through all the letters. Is it not true—those from the last year of his life are just as tender as those written during the first year of our marriage?" She added that she would like to have this fact especially mentioned "to his honor" in any biography in which the data she sent were to be used. This request was not prompted by vanity, but by a just pride in the love her husband had borne her and which she still cherished. The love of his Constance was the solace of Mozart's life.

The wonder-child, born in Salzburg in 1756, and taken by his father from court to court, where he and his sister played to admiring audiences, did not, like so many wonder-children, fade from public view, but with manhood fulfilled the promise of his early years and became one of the world's great masters of music. But his genius was not appreciated until too late. The world of to-day sees in Mozart the type of the brilliant, careless Bohemian, whom it loves to associate with art, and long since has taken him to its heart. But the world of his own day, when he asked for bread, offered him a stone.

Mozart died young; he was only thirty-five. His sufferings were crowded into a few years, but throughout these years there stood by his side one whose love soothed his trials and brightened his life,—the Constance whom he adored. What she wrote to the publishers was strictly true. His last letters to her breathed a love as fervent as the first.

Some six months before he died, she was obliged to go to Baden for her health. "You hardly will believe," he writes to her, "how heavily time hangs on my hands without you. I cannot exactly explain my feelings. There is a void that pains me; a certain longing that cannot be satisfied, hence never ceases, continues ever, aye, grows from day to day. When I think how happy and childlike we would be together in Baden and what sad, tedious hours I pass here! I take no pleasure in my work, because I cannot break it off now and then for a few words with you, as I am accustomed to. When I go to the piano and sing something from the opera ["The Magic Flute"], I have to stop right away, it affects me so. Basta!—if this very hour I could see my way clear to you, the next hour wouldn't find me here." In another letter written at this time he kisses her "in thought two thousand times."

When Mozart first met Constance, she was too young to attract his notice. He had stopped at Mannheim on his way to Paris, whither he was going with his mother on a concert tour. Requiring the services of a music copyist, he was recommended to Fridolin Weber, who eked out a livelihood by copying music and by acting as prompter at the theatre. His brother was the father of Weber, the famous composer, and his own family, which consisted of four daughters, was musical....