The Lost Gospel and Its Contents Or, The Author of "Supernatural Religion" Refuted by Himself 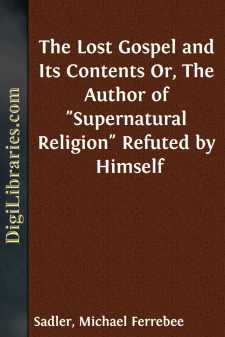 In the following pages I have examined the conclusions at which the author of a book entitled "Supernatural Religion" has assumed to have arrived.

The method and contents of the work in question may be thus described.

The work is entitled "Supernatural Religion, an Inquiry into the Reality of Divine Revelation." Its contents occupy two volumes of about 500 pages each, so that we have in it an elaborate attack upon Christianity of very considerable length. The first 200 pages of the first volume are filled with arguments to prove that a Revelation, such as the one we profess to believe in, supernatural in its origin and nature and attested by miracles, is simply incredible, and so, on no account, no matter how evidenced, to be received.

But, inasmuch as the author has to face the fact, that the Christian Religion professes to be attested by miracles performed at a very late period in the history of the world, and said to have been witnessed by very large numbers of persons, and related very fully in certain books called the Canonical Gospels, which the whole body of Christians have, from a very early period indeed, received as written by eye-witnesses, or by the companions of eye-witnesses, the remaining 800 pages are occupied with attempts at disparaging the testimony of these writings. In order to this, the Christian Fathers and heretical writers of a certain period are examined, to ascertain whether they quoted the four Evangelists. The period from which the writer chooses his witnesses to the use of the four Evangelists, is most unwarrantably and arbitrarily restricted to the first ninety years of the second century (100-185 or so). We shall have ample means for showing that this limitation was for a purpose.

The examination of references, or supposed references, in these books to the first three Gospels fills above 500 pages, and the remainder (about 220) is occupied with an examination of the claims of the fourth Gospel to be considered as canonical.

The writer conducts this examination with an avowed dogmatical bias; and this, as the reader will soon see, influences the manner of his examination throughout the whole book. For instance, he never fails to give to the anti-Christian side the benefit of every doubt, or even suspicion. This leads him to make the most of the smallest discrepancy between the words of any supposed quotation in any early writer from one of our Canonical Gospels, and the words as contained in our present Gospels. If the writer quotes the Evangelist freely, with some differences, however slight, in the words, he is assumed to quote from a lost Apocryphal Gospel....