The Lost Art of Reading 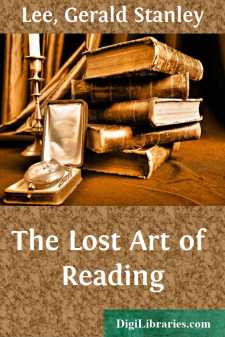 “I see the ships,” said The Eavesdropper, as he stole round the world to me, “on a dozen sides of the world. I hear them fighting with the sea.”

“And what are they doing?”

“And there are some,” said The Eavesdropper, “with roofs of boards above their heads (to protect them from Wonder)—down in the hold—playing cards.”

“What are you seeing now?” I said.

“Trains,” he said—“a globe full of trains. They are on a dozen sides of it. They are clinging to the crusts of it—mountains—rivers—prairies—some in the light and some in the dark—creeping through space.”

“And what do you see in the trains?”

“They are pushing on the trains.”

“What are you seeing now?” I said.

“And what do you see in the streets of cities?”

“And what are the men and women doing?”

The population of the civilised world to-day may be divided into two classes,—millionaires and those who would like to be millionaires. The rest are artists, poets, tramps, and babies—and do not count. Poets and artists do not count until after they are dead. Tramps are put in prison. Babies are expected to get over it. A few more summers, a few more winters—with short skirts or with down on their chins—they shall be seen burrowing with the rest of us.

One almost wonders sometimes, why it is that the sun keeps on year after year and day after day turning the globe around and around, heating it and lighting it and keeping things growing on it, when after all, when all is said and done (crowded with wonder and with things to live with, as it is), it is a comparatively empty globe. No one seems to be using it very much, or paying very much attention to it, or getting very much out of it. There are never more than a very few men on it at a time, who can be said to be really living on it. They are engaged in getting a living and in hoping that they are going to live sometime. They are also going to read sometime.

When one thinks of the wasted sunrises and sunsets—the great free show of heaven—the door open every night—of the little groups of people straggling into it—of the swarms of people hurrying back and forth before it, jostling their getting-a-living lives up and down before it, not knowing it is there,—one wonders why it is there. Why does it not fall upon us, or its lights go suddenly out upon us?...