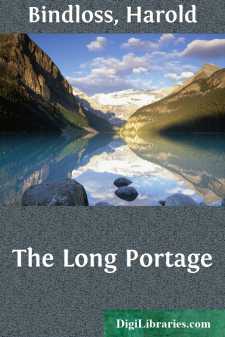 CHAPTER I THE GLADWYNE EXPEDITION

Vernon Lisle was fishing with a determination that did not spring altogether from love of the sport. The water of the British Columbian river in which he stood knee-deep was icy cold; his rubber boots were badly ripped and leaky, and he was wet with the drizzle that drove down the lonely valley. It was difficult to reach the slack behind a boulder some distance outshore, and the arm he strained at every cast ached from hours of assiduous labor; but there was another ache in his left side which was the result of insufficient food, and though the fish were shy he persevered.

A few hundred yards away the stream came roaring down a long declivity in a mad white rapid and then shot across the glassy green surface of the pool below in a raised-up wedge of foam. Wet boulders and outcropping fangs of rock hemmed in the water, and among them lay stranded logs and stream-packed masses of whitened branches. Farther back, ragged cypresses and cedars, half obscured by the drifting haze of spray, climbed the sides of the gorge, and beyond rose the dim, rounded summits of treeless hills. There were streaks of snow on some of them, for winter threatened to close in unusually early.

With a lowering sky overhead and the daylight beginning to fade, it was a desolate picture; one into which the lonely figure of the man in tattered deerskin jacket and shapeless hat somehow fitted. His attire matched the gray-white coloring of rock and boulder; his spare form and agile movements, together with the intentness of his bronzed face and the steadiness of his eyes, hinted at the quickness of observation, the stubborn endurance, and the tireless activity, by which alone life can be maintained in the savage North. He had the alertness of the wild creatures of the waste; and it was needed.

All round him stretched a forbidding wilderness, part of the great desolation which runs north from the warmer and more hospitable thick-forest belt of British Columbia. Indeed, this wilderness, broken by the more level spaces between the Rockies and Lake Winnipeg, runs right across Canada from Labrador to the Pacific on the northern edge of the heavy-timber line. It contains little human life—a few Hudson Bay fur-traders and the half-breed trappers who deal with them—and it is frozen for eight months in the year. There are only two practicable means of traversing it—with dog sledges on the snow, or by canoe on the lakes and rivers in the brief summer.

The water routes are difficult in British Columbia, but Lisle and his two companions had chosen to go by canoe, partly because the question of food is vitally important to men cut off from all source of supply except game, and even that is scarce in places. To transport upon one’s back any weight of provisions besides tents, blankets, and other necessaries, through a rugged country is an almost impossible task. The men, accordingly, after relaying part of their stores, had secured an Indian craft and had paddled and poled her laboriously across lakes and up rivers....