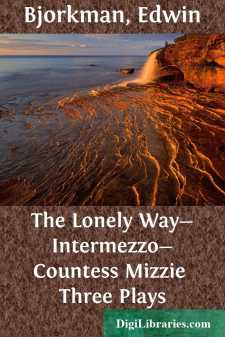 Hermann Bahr, the noted playwright and critic, tried one day to explain the spirit of certain Viennese architecture to a German friend, who persisted in saying: "Yes, yes, but always there remains something that I find curiously foreign." At that moment an old-fashioned Spanish state carriage was coming along the street, probably on its way to or from the imperial palace. The German could hardly believe his eyes and expressed in strong terms his wonderment at finding such a relic surviving in an ultra-modern town like Vienna.

"You forget that our history is partly Spanish," Bahr retorted. "And nothing could serve better than that old carriage to explain what you cannot grasp in our art and poetry."

A similar idea has been charmingly expressed by Hugo von Hofmannsthal in the poem he wrote in 1892—when he was still using the pseudonym of "Loris"—as introduction to "Anatol." I am now adding a translation of that poem to my own introduction, because I think it will be of help in reading the plays of this volume. The scene painted by Hofmannsthal might, on the whole, be used as a setting for "Countess Mizzie." For a more detailed version of that scene he refers us to "Canaletto's Vienna"—that is, to the group of thirteen Viennese views which were painted about 1760 by the Venetian Bernardo Belotto (who, like his more famous uncle and model, Antonio Canale, was generally called Canaletto), and which are now hanging in one of the galleries of the Kunsthistorische Hofmuseum at Vienna. The spirit of those pictures may be described, I am told, as one of stately grace. They are full of Latin joy in life and beauty. They speak of an existence constantly softened by concern for the amenities of life. It is just what survives of their atmosphere that frequently makes foreigners speak of Vienna with a tender devotion not even surpassed by that bestowed on Paris or Rome.

An attempt to understand the atmosphere and spirit of modern Vienna will carry us far toward a correct appreciation of Schnitzler's art. And it is not enough to say that Vienna is one of the oldest cities in Europe. It is not even enough to say that it preserves more of the past than Paris or London, for instance. What we must always bear in mind is its position as the meeting place not only of South and North but also of past and present. In some ways it is a melting-pot on a larger scale than New York even. Racially and lingually, it belongs to the North. Historically and psychologically, it belongs to the South. Economically and politically, it lives very much in the present. Socially and esthetically, it has always been strongly swayed by tradition. The anti-Semitic movement, which formed such a characteristic feature of Viennese life during the last few decades, must be regarded as the last stand of vanishing social traditions against a growing pressure of economical requirements.

Like all cities sharply divided within itself and living above a volcano of half-suppressed passions, Vienna tends to seek in abandoned gayety, in a frank surrender to the senses, that forgetfulness without which suicide would seem the only remaining alternative....