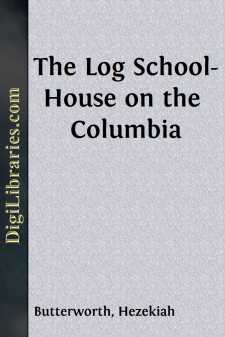 An elderly woman and a German girl were walking along the old Indian trail that led from the northern mountains to the Columbia River. The river was at this time commonly called the Oregon, as in Bryant's poem:

"Where rolls the Oregon,And no sound is heard save its own dashings."

The girl had a light figure, a fair, open face, and a high forehead with width in the region of ideality, and she carried under her arm a long black case in which was a violin. The woman had lived in one of the valleys of the Oregon for several years, but the German girl had recently arrived in one of the colonies that had lately come to the territory under the missionary agency of the Rev. Jason Lee.

There came a break in the tall, cool pines that lined the trail and that covered the path with glimmering shadows. Through the opening the high summits of Mount St. Helens glittered like a city of pearl, far, far away in the clear, bright air. The girl's blue eyes opened wide, and her feet stumbled.

"There, there you go again down in the hollow! Haven't you any eyes? I would think you had by the looks of them. Well, Gretchen, they were placed right in the front of your head so as to look forward; they would have been put in the top of your head if it had been meant that you should look up to the sky in that way. What is it you see?"

"An author! What put that into your simple head? You meant to say you would like to be a poet, but you didn't dare to, because you know I don't approve of such things. People who get such flighty ideas into their loose minds always find the world full of hollows. No, Gretchen, I am willing you should play on the violin, though some of the Methody do not approve of that; and that you should finger the musical glasses in the evening—they have a religious sound and soothe me, like; but the reading of poetry and novels I never did countenance, except Methody hymns and the 'Fool of Quality,' and as for the writing of poetry, it is a Boston notion and an ornary habit. Nature is all full of poetry out here, and what this country needs is pioneers, not poets."

There came into view another opening among the pines as the two went on. The sun was ascending a cloudless sky, and far away in the cerulean arch of glimmering splendors the crystal peaks and domes of St. Helens appeared again.

"What now?" said the woman, testily.

"Look yonder—what for? That's nothing but a mountain, a great waste of land all piled up to the sky, and covered with a lot of ice and snow. I don't see what they were made for, any way—just to make people go round, I suppose, so that the world will not be too easy for them."

"Oh, mother, I do not see how you can feel so out here! I never dreamed of anything so beautiful!"

"Feel so out here! What do you mean? Haven't I always been good to you? Didn't I give you a good home in Lynn after your father and mother died? Wasn't I a mother to you? Didn't I nurse you through the fever?...