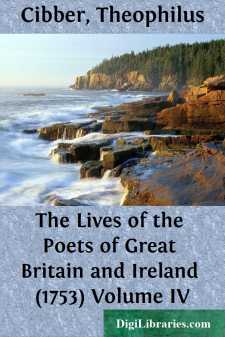 A French gentleman, born and educated at Rohan, in Normandy. He came over into England, was a considerable trader, and resided here many years. He is said to have possessed no inconsiderable share of wit, and humour; and, besides a translation of Don Quixote, several Songs, Prologues and Epilogues, together with a Poem on Tea, dedicated to the Spectator, (see Vol. VII. Numb. 552) he is author of the following dramatic pieces.

1. Love's a Jest, a Comedy; acted at the new Theatre, in little Lincoln's-Inn-Fields, 1696. In the two scenes, where love is made a jest, some passages are taken from Italian writers.

2. The Loves of Mars and Venus; a Masque set to Music, performed at the Theatre in Lincoln's-Inn-Fields, 1696; dedicated to colonel Codrington. The story from Ovid.

3. The Novelty, or every Act a Play; consisting of Pastoral, Comedy, Masque, Tragedy, and Farce, after the Italian manner; acted at the Theatre in little Lincoln's-Inn Fields 1697.

The model of this play is formed upon Sir William Davenant'sPlay-House to be let: But neither of them met with much success.

4. Europe's Revels for the Peace, and his Majesty's Happy Return, a Musical Interlude, performed at the Theatre in Lincoln's-Inn-Fields, 1697.

5. Beauty in Distress, a Tragedy; acted at the Theatre in Lincoln's-Inn-Fields, 1698. There is some poetry in this play; and in the multiplicity of its incidents, he has followed the example of the British Poets. Before this piece, there is prefixed a discourse on the lawfulness or unlawfulness of plays; written originally in French, by the learned father Cassaro, divinity professor at Paris; sent by a friend to Mr. Motteaux.

6. The Island Princess, or the Generous Portugueze; made into an Opera, and performed at the Theatre-Royal 1701. The music by Mr. Daniel Purcell, Mr. Clark, and Mr. Leveridge. The greatest part of the play is taken from Fletcher's Island Princess. Scene the Spice Island.

7. The Four Seasons, or Love in every Age; a musical Interlude, set to Music by Mr. Jeremiah Clark; printed with the musical Entertainments of the above Opera. 8. Britain's Happiness, a musical Interlude; performed at both the Theatres, being part of the entertainment, subscribed for by the nobility. Scene a prospect of Dover castle and the sea. This Interlude was long before designed, only as an introduction to an Opera; which if ever finished was to have been called the Loves of Europe, every act shewing the manner of the different nations in their addresses to the fair-sex; of which he has informed us in his prefatory epistle.

9. Thomyris Queen of Scythia, an Opera; translated from the Italian; performed at the Theatre in Lincoln's-Inn-Fields.

10. The Temple of Love, a Pastoral Opera, from the Italian; performed at the Queen's Theatre in the Hay-market, by her majesty's servants, 1706. Scene Arcadia. Time of action, the same with that of the representation.

This gentleman, who seems to have led a very comfortable life, his circumstances being easy, was unfortunate in his death; for he lost his life in a disorderly house, in the parish of St....