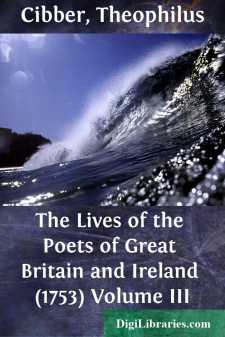 THE LIVES OF THE POETS.

An eminent poet of the 17th century, was the only son of Sir JohnDenham, knight, of Little Horsley in Essex, and sometime baron of theExchequer in Ireland, and one of the lords justices of that kingdom.He was born in Dublin, in the year 1615[1]; but was brought over fromthence very young, on his father's being made one of the barons of theExchequer in England 1617.

He received his education, in grammar learning, in London; and in Michaelmas term 1631 he was entered a gentleman commoner in Trinity College, Oxford, being then 16 years of age; where, as Wood expresses it, 'being looked upon as a slow dreaming young man, and more addicted to gaming than study, they could never imagine he could ever enrich the world with the issue of his brain, as he afterwards did.'

He remained three years at the university, and having been examined at the public schools, for the degree of bachelor of arts, he entered himself in Lincoln's-Inn, where he was generally thought to apply himself pretty closely to the study of the common law. But notwithstanding his application to study, and all the efforts he was capable of making, such was his propensity to gaining, that he was often stript of all his money; and his father severely chiding him, and threatening to abandon him if he did not reform, he wrote a little essay against that vice, and presented it to his father, to convince him of his resolution against it[2]. But no sooner did his father die, than being unrestrained by paternal authority, he reassumed the practice, and soon squandered away several thousand pounds.

In the latter end of the year 1641 he published a tragedy called the Sophy, which was greatly admired, and gave Mr. Waller occasion to say of our author, 'That he broke out like the Irish rebellion, threescore thousand strong, when no body was aware, nor in the Ieast expected it.' Soon after this he was pricked for high sheriff for the county of Surry, and made governor of Farnham-Castle for the King; but not being well skilled in military affairs, he soon quitted that post and retired to his Majesty at Oxford, where he published an excellent poem called Cooper's-hill, often reprinted before and since the restoration, with considerable alterations; it has been universally admired by all good judges, and was translated into Latin verse, by Mr. Moses Pengry of Oxford.

Mr. Dryden speaking of this piece, in his dedication of his Rival Ladies, says, that it is a poem, which, for the Majesty of the stile, will ever be the exact standard of good writing, and the noble author of an essay on human life, bestows upon it the most lavish encomium[3]. But of all the evidences in its favour, none is of greater authority, or more beautiful, than the following of Mr. Pope, in his Windsor Forest.

Ye sacred nine, that all my soul possess,  Whose raptures fire me, and whose visions bless;  Bear me, O bear me, to sequester'd scenes,  The bow'ry mazes, and surrounding greens;  To Thames's bank which fragrant breezes fill,  Or where the muses sport on Cooper's-hill....