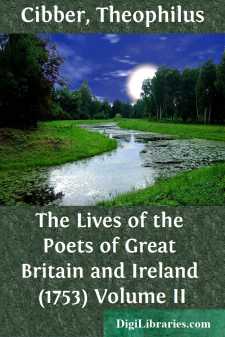 THE LIVES OF THE POETS Anthony Brewer,

A poet who flourished in the reign of Charles I. but of whose birth and life we can recover no particulars. He was highly esteemed by some wits in that reign, as appears from a Poem called Steps to Parnassus, which pays him the following well turned compliment.

Mr. Winstanley, and after him Chetwood, has attributed a play to our author called Lingua, or the Contention of the Tongue and the Five Senses for Superiority, a Comedy, acted at Cambridge, 1606; but Mr. Langbaine is of opinion, that neither that, Love's Loadstone, Landagartha, or Love's Dominion, as Winstanley and Philips affirm, are his; Landagartha being written by Henry Burnel, esquire, and Love's Dominion by Flecknoe. In the Comedy called Lingua, there is a circumstance which Chetwood mentions, too curious, to be omitted here. When this play was acted at Cambridge, Oliver Cromwel performed the part of Tactus, which he felt so warmly, that it first fired his ambition, and, from the possession of an imaginary crown, he stretched his views to a real one; to accomplish which, he was content to wade through a sea of blood, and, as Mr. Gray beautifully expresses it, shut the Gates of Mercy on Mankind; the speech with which he is said to have been so affected, is the following,

Roses, and bays, pack hence: this crown and robe,My brows, and body, circles and invests;How gallantly it fits me! sure the slaveMeasured my head, that wrought this coronet;They lie that say, complexions cannot change!My blood's enobled, and I am transform'dUnto the sacred temper of a king;Methinks I hear my noble ParasitesStiling me Cæsar, or great Alexander,Licking my feet,—&c.

Country Girl, a Comedy, often acted with applause, printed in 4to. 1647. This play has been revived since the Restoration, under the title of Country Innocence, or the Chamber-maid turned Quaker.

Love-sick King, an English Tragical History, with the Life and Death of Cartesmunda, the Fair Nun of Winchester; printed in 4to. London, 1655; this play was likewise revived 1680, and acted by the name of the Perjured Nun. The historical part of the plot is founded upon the Invasion of the Danes, in the reign of King Ethelred and Alfred.

This last play of Anthony Brewer's, is one of the best irregular plays, next to those of Shakespear, which are in our language. The story, which is extremely interesting, is conducted, not so much with art, as spirit; the characters are animated, and the scene busy. Canutus King of Denmark, after having gained the city of Winchester, by the villainy of a native, orders all to be put to the sword, and at last enters the Cloister, raging with the thirst of blood, and panting for destruction; he meets Cartesmunda, whose beauty stops his ruffian violence, and melts him, as it were, into a human creature....