The Little White Bird; or, Adventures in Kensington gardens 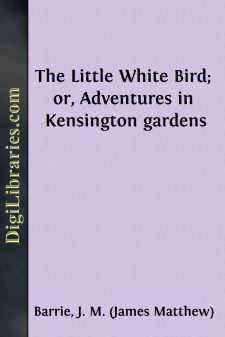 I. David and I Set Forth Upon a Journey

Sometimes the little boy who calls me father brings me an invitation from his mother: "I shall be so pleased if you will come and see me," and I always reply in some such words as these: "Dear madam, I decline." And if David asks why I decline, I explain that it is because I have no desire to meet the woman.

"Come this time, father," he urged lately, "for it is her birthday, and she is twenty-six," which is so great an age to David, that I think he fears she cannot last much longer.

I had my delicious dream that night. I dreamt that I too was twenty-six, which was a long time ago, and that I took train to a place called my home, whose whereabouts I see not in my waking hours, and when I alighted at the station a dear lost love was waiting for me, and we went away together. She met me in no ecstasy of emotion, nor was I surprised to find her there; it was as if we had been married for years and parted for a day. I like to think that I gave her some of the things to carry.

Were I to tell my delightful dream to David's mother, to whom I have never in my life addressed one word, she would droop her head and raise it bravely, to imply that I make her very sad but very proud, and she would be wishful to lend me her absurd little pocket handkerchief. And then, had I the heart, I might make a disclosure that would startle her, for it is not the face of David's mother that I see in my dreams.

Has it ever been your lot, reader, to be persecuted by a pretty woman who thinks, without a tittle of reason, that you are bowed down under a hopeless partiality for her? It is thus that I have been pursued for several years now by the unwelcome sympathy of the tender-hearted and virtuous Mary A——. When we pass in the street the poor deluded soul subdues her buoyancy, as if it were shame to walk happy before one she has lamed, and at such times the rustle of her gown is whispered words of comfort to me, and her arms are kindly wings that wish I was a little boy like David. I also detect in her a fearful elation, which I am unaware of until she has passed, when it comes back to me like a faint note of challenge. Eyes that say you never must, nose that says why don't you? and a mouth that says I rather wish you could: such is the portrait of Mary A—— as she and I pass by.

Once she dared to address me, so that she could boast to David that I had spoken to her. I was in the Kensington Gardens, and she asked would I tell her the time please, just as children ask, and forget as they run back with it to their nurse. But I was prepared even for this, and raising my hat I pointed with my staff to a clock in the distance. She should have been overwhelmed, but as I walked on listening intently, I thought with displeasure that I heard her laughing.

Her laugh is very like David's, whom I could punch all day in order to hear him laugh. I dare say she put this laugh into him. She has been putting qualities into David, altering him, turning him forever on a lathe since the day she first knew him, and indeed long before, and all so deftly that he is still called a child of nature....