The Little Regiment And Other Episodes of the American Civil War 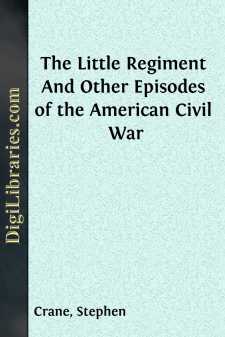 The fog made the clothes of the men of the column in the roadway seem of a luminous quality. It imparted to the heavy infantry overcoats a new colour, a kind of blue which was so pale that a regiment might have been merely a long, low shadow in the mist. However, a muttering, one part grumble, three parts joke, hovered in the air above the thick ranks, and blended in an undertoned roar, which was the voice of the column.

The town on the southern shore of the little river loomed spectrally, a faint etching upon the gray cloud-masses which were shifting with oily languor. A long row of guns upon the northern bank had been pitiless in their hatred, but a little battered belfry could be dimly seen still pointing with invincible resolution toward the heavens.

The enclouded air vibrated with noises made by hidden colossal things. The infantry tramplings, the heavy rumbling of the artillery, made the earth speak of gigantic preparation. Guns on distant heights thundered from time to time with sudden, nervous roar, as if unable to endure in silence a knowledge of hostile troops massing, other guns going to position. These sounds, near and remote, defined an immense battle-ground, described the tremendous width of the stage of the prospective drama. The voices of the guns, slightly casual, unexcited in their challenges and warnings, could not destroy the unutterable eloquence of the word in the air, a meaning of impending struggle which made the breath halt at the lips.

The column in the roadway was ankle-deep in mud. The men swore piously at the rain which drizzled upon them, compelling them to stand always very erect in fear of the drops that would sweep in under their coat-collars. The fog was as cold as wet cloths. The men stuffed their hands deep in their pockets, and huddled their muskets in their arms. The machinery of orders had rooted these soldiers deeply into the mud precisely as almighty nature roots mullein stalks.

They listened and speculated when a tumult of fighting came from the dim town across the river. When the noise lulled for a time they resumed their descriptions of the mud and graphically exaggerated the number of hours they had been kept waiting. The general commanding their division rode along the ranks, and they cheered admiringly, affectionately, crying out to him gleeful prophecies of the coming battle. Each man scanned him with a peculiarly keen personal interest, and afterward spoke of him with unquestioning devotion and confidence, narrating anecdotes which were mainly untrue.

When the jokers lifted the shrill voices which invariably belonged to them, flinging witticisms at their comrades, a loud laugh would sweep from rank to rank, and soldiers who had not heard would lean forward and demand repetition. When were borne past them some wounded men with gray and blood-smeared faces, and eyes that rolled in that helpless beseeching for assistance from the sky which comes with supreme pain, the soldiers in the mud watched intently, and from time to time asked of the bearers an account of the affair. Frequently they bragged of their corps, their division, their brigade, their regiment. Anon they referred to the mud and the cold drizzle. Upon this threshold of a wild scene of death they, in short, defied the proportion of events with that splendour of heedlessness which belongs only to veterans.

"Like a lot of wooden soldiers," swore Billie Dempster, moving his feet in the thick mass, and casting a vindictive glance indefinitely; "standing in the mud for a hundred years."