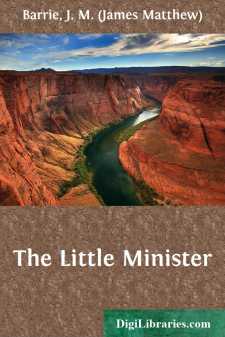 CHAPTER I. THE LOVE-LIGHT.

Long ago, in the days when our caged blackbirds never saw a king's soldier without whistling impudently, "Come ower the water to Charlie," a minister of Thrums was to be married, but something happened, and he remained a bachelor. Then, when he was old, he passed in our square the lady who was to have been his wife, and her hair was white, but she, too, was still unmarried. The meeting had only one witness, a weaver, and he said solemnly afterwards, "They didna speak, but they just gave one another a look, and I saw the love-light in their een." No more is remembered of these two, no being now living ever saw them, but the poetry that was in the soul of a battered weaver makes them human to us for ever.

It is of another minister I am to tell, but only to those who know that light when they see it. I am not bidding good-bye to many readers, for though it is true that some men, of whom Lord Rintoul was one, live to an old age without knowing love, few of us can have met them, and of women so incomplete I never heard.

Gavin Dishart was barely twenty-one when he and his mother came to Thrums, light-hearted like the traveller who knows not what awaits him at the bend of the road. It was the time of year when the ground is carpeted beneath the firs with brown needles, when split-nuts patter all day from the beech, and children lay yellow corn on the dominie's desk to remind him that now they are needed in the fields. The day was so silent that carts could be heard rumbling a mile away. All Thrums was out in its wynds and closes— a few of the weavers still in knee-breeches—to look at the new Auld Licht minister. I was there too, the dominie of Glen Quharity, which is four miles from Thrums; and heavy was my heart as I stood afar off so that Gavin's mother might not have the pain of seeing me. I was the only one in the crowd who looked at her more than at her son.

Eighteen years had passed since we parted. Already her hair had lost the brightness of its youth, and she seemed to me smaller and more fragile; and the face that I loved when I was a hobbledehoy, and loved when I looked once more upon it in Thrums, and always shall love till I die, was soft and worn. Margaret was an old woman, and she was only forty-three: and I am the man who made her old. As Gavin put his eager boyish face out at the carriage window, many saw that he was holding her hand, but none could be glad at the sight as the dominie was glad, looking on at a happiness in which he dared not mingle. Margaret was crying because she was so proud of her boy. Women do that. Poor sons to be proud of, good mothers, but I would not have you dry those tears.

When the little minister looked out at the carriage window, many of the people drew back humbly, but a little boy in a red frock with black spots pressed forward and offered him a sticky parly, which Gavin accepted, though not without a tremor, for children were more terrible to him then than bearded men. The boy's mother, trying not to look elated, bore him away, but her face said that he was made for life....