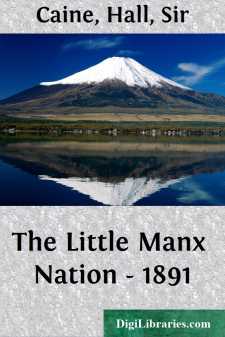 THE STORY OF THE MANX KINGS

There are just two ideas which are associated in the popular imagination with the first thought of the Isle of Man. The one is that Manxmen have three legs, and the other that Manx cats have no tails. But whatever the popular conception, or misconception, of Man and its people, I shall assume that what you ask from me is that simple knowledge of simple things which has come to me by the accident of my parentage. I must confess to you at the outset that I am not much of a hand at grave history. Facts and figures I cannot expound with authority. But I know the history of the Isle of Man, can see it clear, can see it whole, and perhaps it will content you if I can show you the soul of it and make it to live before you. In attempting to traverse the history I feel like one who carries a dark lantern through ten dark centuries. I turn the bull's eye on this incident and that, take a peep here and there, a white light now, and then a blank darkness. Those ten centuries are full of lusty fights, victories, vanquishments, quarrels, peacemaking, shindies big and little, rumpus solemn and ridiculous, clouds of dust, regal dust, political dust, and religious dust—you know the way of it. But beneath it all and behind it all lies the real, true, living human heart of Manxland. I want to show it to you, if you will allow me to spare the needful time from facts and figures. It will get you close to Man and its people, and it is not to be found in the history books.

And now, first, we Manxmen are islanders. It is not everybody who lives on an island that is an islander. You know what I mean. I mean by an islander one whose daily life is affected by the constant presence of the sea. This is possible in a big island if it is far enough away from the rest of the world, Iceland, for example, but it is inevitable in a little one. The sea is always present with Manxmen. Everything they do, everything they say, gets the colour and shimmer of the sea. The sea goes into their bones, it comes out at their skin. Their talk is full of it. They buy by it, they sell by it, they quarrel by it, they fight by it, they swear by it, they pray by it. Of course they are not conscious of this. Only their degenerate son, myself to wit, a chiel among them takin' notes, knows how the sea exudes from the Manxmen. Say you ask if the Governor is at home. If he is not, what is the answer? "He's not on the island, sir." You inquire for the best hotel. "So-and-so is the best hotel on the island, sir." You go to a Manx fair and hear a farmer selling a cow. "Aw," says he, "she's a ter'ble gran' craythuer for milkin', sir, and for butter maybe there isn' the lek of her on the island, sir." Coming out of church you listen to the talk of two old Manxwomen discussing the preacher. "Well, well, ma'am, well, well! Aw, the voice at him! and the prayers! and the beautiful texes! There isn' the lek of him on the island at all, at all!" Always the island, the island, the island, or else the boats, and going out to the herrings....