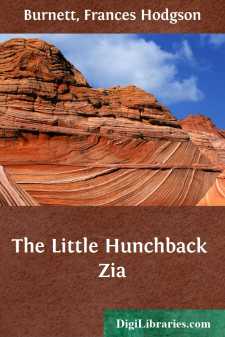 The little hunchback Zia toiled slowly up the steep road, keeping in the deepest shadows, even though the night had long fallen. Sometimes he staggered with weariness or struck his foot against a stone and smothered his involuntary cry of pain. He was so full of terror that he was afraid to utter a sound which might cause any traveler to glance toward him. This he feared more than any other thing—that some man or woman might look at him too closely. If such a one knew much and had keen eyes, he or she might in some way guess even at what they might not yet see.

Since he had fled from the village in which his wretched short life had been spent he had hidden himself in thickets and behind walls or rocks or bushes during the day, and had only come forth at night to stagger along his way in the darkness. If he had not managed to steal some food before he began his journey and if he had not found in one place some beans dropped from a camel's feeding-bag, he would have starved. For five nights he had been wandering on, but in his desperate fear he had lost count of time. When he had left the place he had called his home he had not known where he was going or where he might hide himself in the end. The old woman with whom he had lived and for whom he had begged and labored had driven him out with a terror as great as his own.

"Begone!" she had cried in a smothered shriek. "Get thee gone, accursed! Even now thou mayest have brought the curse upon me also. A creature born a hunchback comes on earth with the blight of Jehovah's wrath upon him. Go far! Go as far as thy limbs will carry thee! Let no man come near enough to thee to see it! If thou go far away before it is known, it will be forgotten that I have harbored thee."

He had stood and looked at her in the silence of the dead, his immense, black Syrian eyes growing wider and wider with childish horror. He had always regarded her with slavish fear. What he was to her he did not know; neither did he know how he had fallen into her hands. He knew only that he was not of her blood or of her country and that he yet seemed to have always belonged to her. In his first memory of his existence, a little deformed creature rolling about on the littered floor of her uncleanly hovel, he had trembled at the sound of her voice and had obeyed it like a beaten spaniel puppy. When he had grown older he had seen that she lived upon alms and thievery and witchlike evil doings that made all decent folk avoid her. She had no kinsfolk or friends, and only such visitors as came to her in the dark hours of night and seemed to consult with her as she sat and mumbled strange incantations while she stirred a boiling pot. Zia had heard of soothsayers and dealers with evil spirits, and at such hours was either asleep on his pallet in a far corner or, if he lay awake, hid his face under his wretched covering and stopped his ears. Once when she had drawn near and found his large eyes open and staring at her in spellbound terror, she had beaten him horribly and cast him into the storm raging outside.

A strange passion in her seemed her hatred of his eyes. She could not endure that he should look at her as if he were thinking. He must not let his eyes rest on her for more than a moment when he spoke. He must keep them fixed on the ground or look away from her. From his babyhood this had been so. A hundred times she had struck him when he was too young to understand her reason. The first strange lesson he had learned was that she hated his eyes and was driven to fury when she found them resting innocently upon her....