The Little City of Hope A Christmas Story 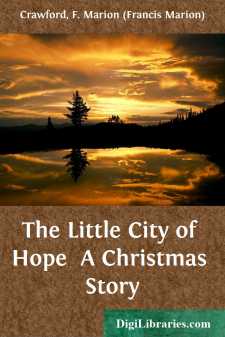 I HOW JOHN HENRY OVERHOLT SAT ON PANDORA'S BOX

"Hope is very cheap. There's always plenty of it about."

With this mild retort and civil salutation John Henry Overholt rose and went towards the door, quite forgetting to shake hands with Mr. Burnside, though the latter made a motion to do so. Mr. Burnside always gave his hand in a friendly way, even when he had flatly refused to do what people had asked of him. It was cheap; so he gave it.

But he was not pleased when they did not take it, for whatever he chose to give seemed of some value to him as soon as it was offered; even his hand. Therefore, when his visitor forgot to take it, out of pure absence of mind, he was offended, and spoke to him sharply before he had time to leave the private office.

"You need not go away like that, Mr. Overholt, without shaking hands."

The visitor stopped and turned back at once. He was thin and rather shabbily dressed. I know many poor men who are fat, and some who dress very well; but this was not that kind of poor man.

He came back, and Mr. Burnside shook hands with becoming coldness, as having just given a lesson in manners. He was not a bad man, nor a miser, nor a Scrooge, but he was a great stickler for manners, especially with people who had nothing to give him. Besides, he had already lent Overholt money; or, to put it nicely, he had invested a little in his invention, and he did not see any reason why he should invest any more until it succeeded. Overholt called it selling shares, but Mr. Burnside called it borrowing money. Overholt was sure that if he could raise more funds, not much more, he could make a success of the "Air-Motor"; Mr. Burnside was equally sure that nothing would ever come of it. They had been explaining their respective points of view to each other, and in sheer absence of mind Overholt had forgotten to shake hands.

Mr. Burnside had no head for mechanics, but Overholt had already made an invention which was considered very successful, though he had got little or nothing for it. The mechanic who had helped him in its construction had stolen his principal idea before the device was patented, and had taken out a patent for a cheap little article which every one at once used, and which made a fortune for him. Overholt's instrument took its place in every laboratory in the world; but the mechanic's labour-saving utensil took its place in every house. It was on the strength of the valuable tool of science that Mr. Burnside had invested two thousand dollars in the Air-Motor without really having the smallest idea whether it was to be a machine that would move the air, or was to be moved by it. A number of business men had done the same thing.

Then, at a political dinner in a club, three of the investors had dined at the same small table, and in an interval between the dull speeches, one of the three told the others that he had looked into the invention and that there was nothing in Overholt's motor after all....