The Light Shines in Darkness 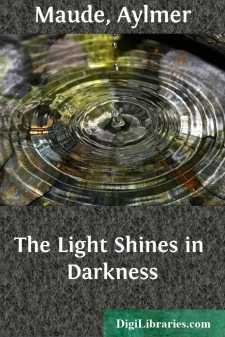 The scene represents the verandah of a fine country-house, in front of which a croquet-lawn and tennis-court are shown, also a flower-bed. The children are playing croquet with their governess. Mary Ivánovna Sarýntsova, a handsome elegant woman of forty; her sister, Alexándra Ivánovna Kóhovtseva, a stupid, determined woman of forty-five; and her husband, Peter Semyónovich Kóhovtsef, a fat flabby man, dressed in a summer suit, with a pince-nez, are sitting on the verandah at a table with a samovár and coffee-pot. Mary Ivánovna Sarýntsova, Alexándra Ivánovna Kóhovtseva, and Peter Semyónovich Kóhovtsev are drinking coffee, and the latter is smoking.

ALEXÁNDRA IVÁNOVNA. If you were not my sister, but a stranger, and Nicholas Ivánovich not your husband, but merely an acquaintance, I should think all this very original, and perhaps I might even encourage him, J'aurais trouvé tout ça très gentil; but when I see that your husband is playing the fool—yes, simply playing the fool—then I can't help telling you what I think about it. And I shall tell your husband, Nicholas, too. Je lui dirai son fait, ma chère. I am not afraid of anyone.

MARY IVÁNOVNA. I don't feel the least bit hurt; don't I see it all myself? but I don't think it so very important.

ALEXÁNDRA IVÁNOVNA. No. You don't think so, but I tell you that, if you let it go on, you will be beggared. Du train que cela va …

PETER SEMYÓNOVICH. Come! Beggared indeed! Not with an income like theirs.

ALEXÁNDRA IVÁNOVNA. Yes, beggared! And please don't interrupt me, my dear! Anything a man does always seems right to you!

PETER SEMYÓNOVICH. Oh! I don't know. I was saying——

ALEXÁNDRA IVÁNOVNA. But you never do know what you are saying, because when you men begin playing the fool, il n'y a pas de raison que ça finisse. I am only saying that if I were in your place, I should not allow it. J'aurais mis bon ordre à toutes ces lubies. What does it all mean? A husband, the head of a family, has no occupation, abandons everything, gives everything away, et fait le généreux à droite et à gauche. I know how it will end! Nous en savons quelque chose.

PETER SEMYÓNOVICH [to Mary Ivánovna]. But do explain to me, Mary, what is this new movement? Of course I understand Liberalism, County Councils, the Constitution, schools, reading-rooms, and tout ce qui s'en suit; as well as Socialism, strikes, and an eight-hour day; but what is this? Explain it to me.

MARY IVÁNOVNA. But he told you about it yesterday.

PETER SEMYÓNOVICH. I confess I did not understand. The Gospels, the Sermon on the Mount—and that churches are unnecessary! But then how is one to pray, and all that?

MARY IVÁNOVNA. Yes. That is the worst of it. He would destroy everything, and give us nothing in its place.

PETER SEMYÓNOVICH. How did it begin?

MARY IVÁNOVNA. It began last year, after his sister died. He was very fond of her, and her death had a very great effect on him. He became quite morose, and was always talking about death; and then, you know, he fell ill himself with typhus....