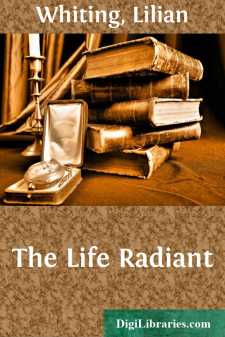 The Life Radiant is that transfiguration of the ordinary daily events and circumstances which lifts them to the spiritual plane and sees them as the signs and the indications of the divine leading. Every circumstance thus becomes a part of the revelation; and to constantly live in this illuminated atmosphere is to invest all experiences with a kind of magical enchantment. Life prefigures itself before us as a spiritual drama in which we are, at once, the actors and the spectators. The story of living goes on perpetually. The days and the years inevitably turn the pages and open new chapters. Nothing is ever hopeless, because new combinations and groupings create new results. The forces that determine his daily life are partly with man and partly with God. They lie in both the Seen and the Unseen. We are always an inhabitant of both realms, and to recognize either alone and be blind to the other is to deprive ourselves of the great sources of energy. The divine aid, infinite and all-potent as it is, capable at any moment of utterly transforming all the conditions and transferring them to a higher plane, is yet limited by the degree of spiritual receptivity in the individual. As one may have all the air that he is able to breathe, so may one have all the aid of the Holy Spirit which he is capable of receiving. Man can never accept so gladly and so freely as God offers; but in just the proportion to which he can, increasingly, lift up his heart in response, to that degree God fills his life with a glory not of earth.

"Man may ask, and God may answer, but we may not understand,Knowing but our own poor language, all the writing of His hand."

Science has discovered the existence of that incalculable energy, the ether, interpenetrated in the atmosphere. Electro-magnetic currents of power beyond all conception are revealed, and when intelligently recognized by some happy genius, like that of Marconi, they begin to be utilized in the service of human progress. Now as this ethereal energy which is only just beginning to be recognized can be drawn upon for light, for heat, for motor power, for communication, just as this hitherto undreamed-of power can be drawn upon for the fundamental needs of the physical world, so, correspondingly, does there exist the infinite reservoir of spiritual energy which God freely opens to man in precisely the proportion in which he recognizes and avails himself of its transforming power. And in this realm lies the Life Radiant. If this transfiguration of life could only be experienced by the aid of wealth and health and all for which these two factors stand, it would not be worth talking about. We hear a great deal of the "privileged classes" and of "fortunate conditions," as if there were certain arbitrary divisions in life defined by impassable boundaries, and that he who finds himself in one, is unable to pass to another.

Never was there a more fatally erroneous conception. In the spiritual world there are no limits, no boundaries, no arbitrary divisions. Just so far as the soul conquers, is it free. Conquer ignorance, and one enters the realm of education, of culture; conquer vice, and he enters into the realm of virtue; conquer impatience and irritability and bitterness, and their result in gloom and despondency, and he enters into the realm of serenity and sweetness and exaltation with their result in power of accomplishment. The Life Radiant can be achieved, and is within the personal choice of every individual. One may place himself in relation with this infinite and all-potent current of divine energy and receive its impetus and its exhilaration and its illumination every hour in the day....